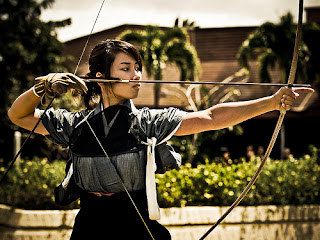 (This great photo was found at http://taintedink.com/hit-the-heart/, a site well worth a check. Though I'm not sure if it's the original source. If not, I will cite it correctly if notified.)
The other morning I really didn't want to go to kyudo. But that's not interesting, because it's niether strange or rare. Most mornings I awake early after long hours of       dreams, and the long trip to training ranks below more sleep on the "want-to-do" list. However, I've realized that this is the best omen for a good practice. On the contrary, it's when I'm going to kyudo full of enthusiasm and confidence that I usually am greatly disappointed. Actually, it's not quite disappointment, as much as stark reminders of my humble less-than-master state; the epic ego battle within myself is just a side effect of the greater force of Truth in cause and affect. For example, I'll go in with a plan to fix whatever problem I find most important, only to have Sensei demand my attention elsewhere. Or maybe I go in with the intention to hit the target. That's when I miss the most. Maybe I'll go in thinking everything is OK, and then I'll find another way to misuse the equipment so that it injures me. I'm already well practiced in the string slapping my forearm and face. What other forms of budo masochism can I find? Basically, it's when I go in expecting the secret skills of budo to reveal themselves to me that I get slapped in the face.

Speaking of that particular issue, it's pretty well taken care of. It doesn't happen anymore primarily for two reasons. First, I just don't want it to. I won't let the string hit me anymore. I won't tolerate it. I'm so sick of it that lousy situation, it's just not going to happen anymore. Make sense? It's the same thing teaching particular kids that make my life a living hell for the hour they are in my classroom. I would spend weeks devising new plans to break them, but usually it wasn't until I finally said, "No, they're not going to do that anymore. They're not going to f$#k with my class anymore" that they magically stopped being so powerful. This does not mean beating your kids physically or emotionally into submission, and it's not overcoming the kyudo bow with invincible strength. It's a very soft and quiet strength: it's fact. It doesn't need loud proclamations or physical effort. It's fact. "I'm not going to get slapped in the face anymore."

Second, and perhaps more important, is that I understand completely that I need to keep my hand properly rotated throughout the pulling back of the bow so that the string doesn't slip out. That is another fact. It doesn't matter what I do otherwise, if I turn my wrist the wrong way, the string will come out. This is something I made sure to fix the other day, and I got hit a total of 0 times. But I still have a bit of the fear in me. I pull with confidence, but I'm incredibly sensitive to the potential of a slipping string that more than a couple times in the middle of the draw I got spooked and returned. This isn't good, and Sensei reminded me of it when he caught me.

Also, this may be the most important part of the post, in case people are actually reading this blog looking for technical pointers on how improve their kyudo. Luckily, I don't think that's the case. People shouldn't take my words of technique as fact for quite a long while. Anyway, in a post or two back I mentioned one method of pulling the bow back which would better ensure my safety from the string. Instead of pulling the string straight back to the position it should be behind my head in one motion, I would pull it back in front of my face, and then touch it to my face in it's proper position. This way, in case the string pre-released, my face would not be in the way. Seemed like a brilliant idea, actually. Well, the day after I wrote that post I went to kyudo, and the first thing Sensei said to me, even before I took my first shot, was to be careful of not doing that. I didn't understand completely at first, but it makes perfect sense now for three reasons:

First, it makes your shot incredibly innacurate. After you raise the bow over your head and move into the daisan posture, the arrow should be aimed at the target, and aimed thusly until it's stuck right through the middle of the bullseye. If you pull the string back in front of you, the arrow points far to the left, so that when you are in the full draw, you have to readjust to the target. Aim, misaim, aim again. That's no good. Your arrow should be locked into the target from daisan until the very end.

Second, you can't pull back fully, which also makes your shot innacurate. This has been my number one immediate issue lately: not pulling back enough. More than anything else, Sensei is always telling me "More!" "Pull back more!" "Farther!" Those words are pretty well burned into my head whenever I'm going through the motions, which I'm thankful for. He says once I start pulling to my full potential, I'll begin to hit the target a lot more. Those few times I do pull back successfully, the result is usually a hit target and a great feeling, not just because of hitting the target, but because of the great release from the maximum tension. For one to execute an effective release, one must pull back as far as possible. All afterwards depends on this.

Thirdly, it's not economical movement. If there's one common theme my teachers have linked to the theory of budo, it's economy of motion. The shortest path between two points is a straight line and less is more. By pulling the string in front of my face, I'm adding superfluous movements which weaken the structure of the whole.

So yeah, no more string slapping. That's really exciting. Hopefully I won't have to talk about it anymore in future posts.

Now for a couple exciting improvements to my kyudo.

Sensei started teaching me his style of shooting. In this area of Japan, the most commonly practiced style of kyudo is reisha 礼射, which is what I started learning and what probably 95% of practitioners in Toyama Prefecture practice, but it's not what my Sensei does. Reisha is basically the standard form of shooting. But what my sensei does is actually called musha 武射, because he spent most of his formative years in kyudo in Fukuoka City in the southwestern island of Kyushu where this style is more prevalent. He says you can shoot more accurately with it, which is probably one of the many reasons he uses it instead of the reisha. To be brief on the subject, this is very exciting to me because he's teaching me this style which he doesn't do for everyone, and I believe it has more roots in the practice samurai used back in the day. Soon I'll do some more hard research on the subject and let it be known here.

Also, I upgraded to a stronger bow, 16 kg to be precise. As you practice kyudo, it's natural to move up, and symbolic of one's progress. The feeling is completely different. It wasn't so hard to pull as I had expected, but when you release there's a lot more force going into the shot, which is really fun to feel. I'll have to speak more on this in a future post.

Obviously I'm running out of juice here, but I'd like to say one more thing about kyudo before I sign out.

I feel incredibly lucky to have the teacher I have who spends so much uninhibited time and effort into my progress. My kyudo would be completely different without him, and lacking I think. One cannot do kyudo alone, and it cannot be well without an excellent teacher. This is true with all budo, but for some reason, it's really that way with kyudo.

From an eager practitioner to all teachers: please continue to give your absolute excellent best no matter what.

From an eager practitioner to all other eager practitioners: give everything you can every second the light shines on you, and just as much when you're in the shadows. It is indeed a privelage to receive and give to the various practices of budo.