Split Your Mind in 2 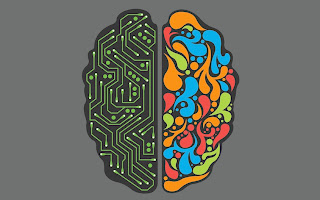 I've just finished reading the amazing fantasy novel, "The Name of the Wind" by Patrick Rothfuss, and it talks about a magic technique that seems very relevant to kyudo.

The main character is a young boy learning to perform magic, "sympathy" as referred to in the book, and for particular abilities, he must split his mind into two different parts to concentrate on various phenomenon. I can't quote it directly, but I remember being duly impressed by the author's description of such a feat that boggles the logical mind, but nevertheless is a recurring theme in some martial arts and zen philosophy; particularly kyudo, which incorporates qualities of both.

In kyudo, your hands are doing completely different, but equally important jobs. Your left hand is working on the tenouchi, your grip of the bow, which is comprised of holding the bow in the proper way before you release, as well as moving the bow inside your hand in transition through the movements and during the rotation of the bow within your hand during the release. In your right hand, which is inside of a kake (glove), is placed where the arrow is knocked (clipped into the string) and the string is pulled by this hand. The hand must maintain the correct position with the back of the hand facing up (if you've read any of my posts concerning kyudo you know why!), and is responsible for the hanare, release.

Up until now, with about seven months of training, I've gone through correcting and improving a wide array of issues in kyudo form. I think first you have to get to a point where you can stand and learn to safely shoot on your own at the target while generally adhering to the basic principles. That took me about two months (the two month introductory course seemed to successfully achieve this goal.) After that, some main issues have been:

Keeping my back straight. (I had a tendency to lean my chest too far forward for many reasons.)

Turning my head far enough. (It seemed very unnatural to turn it so far at first.)

Positioning my arm and rotating my left hand so I didn't get slapped on the forearm by the string. (I see a few details of the why's concerning this issue, but the problem seriously just disappeared on it's own! Strange stuff.)

Positioning my right hand so that the string doesn't come out too early. (Nightmare. See many previous posts for more details.)

Pulling the string back far enough over your head into a full draw. (Perhaps the number one issue I've been working on recently, and the one that effects shooting the most.)

Scooping the bow in front of you. (When you raise the bow in uchiokoshi, it's not just a straight up movement, but a slightly curving one that resembles scooping up a big net full of water.)

Correct Daisan posture. (After raising the bow over you head, you move into this posture, slowly raising your hands, aligning a correct angle with the target, moving your left hand slightly before the right.)

This doesn't include a lot of smaller issues I haven't really had specific problems with, as well as all of the problems I've never even thought of.

This also includes all of the movements of etiquette that are performed before and after the shooting, like the proper movements for entering and exiting the shooting area in a demonstration, test, or competition, movements for practicing on your own in the dojo, both sitting and standing.

This also includes putting on and taking off your hakama, traditional kyudo super hero outfit, which is by far the most complicated clothing I've worn to date. Doing this by myself took way longer than any one would expect.

This also includes some simple maintenance on your arrows, like fixing deformed feathers, and fixing a fraying string on the bow.

This also includes setting and taking down the targets for shooting and cleaning the dojo.

Wow, I guess I have learned a few things.

ANYWAY! Back to the splitting the mind in two idea ...

Now my current issues are dealing with the left and right hands as mentioned earlier. These seem to be some of the most basic issues in kyudo, but also incredibly difficult facets that remain the focus of practitioners for many long years (now seemingly more so than other parts of technique). Up until now, much time has been spent on them already, but they've finally seemed to override other issues and take the spotlight.

For another explanation of what's happening with my tenouchi (left hand grip on the bow), I'm working on:

1.) Getting a proper grip in the beginning to set up the rest of the movements.

2.) Turning the bow in my tenouchi so that it doesn't break down the form (seemingly the most difficult part right now).

3.) Propelling the arrow forward with the inside base of my thumb, instead of turning my whole hand during the release.

As for my right hand inside of the kake (glove), I'm working on the form of my hanare (release). When you release with the right hand, it should release behind you, as if you're hitting a drum a foot behind you with the back of your hand. I have had a tendency to release my hand up, but instead I need to release it out more in front of me while slightly dropping my elbow.

So during practice, I keep receiving advice concerning one of these.

"Zac, be mindful of your tenouchi and do it like this." (Enter lengthy verbal descriptions and physical examples)

"You forgot about your hanare!"

"What the hell! You told me to focus on the tenouchi!"

I don't ever say that last part, but I can't tell you how many times I've heard it howling from the inside of my head. But I also understand that when doing kyudo you have to be mindful of all of these things at the same time, or at least you can't compromise one for the other. I'm aware of the ideal, I just can't put it into practice yet. This is why budo takes so much time. One must practice all of the basics until they are ingrained so deeply in one's movements that they don't require your conscious attention.

It's funny, this phenomenon of not focusing on something that matters often relates to aiming the arrow. While practicing kyudo, I'm working on all of these various things with all of your attention, and so often I don't even aim! So many times Sensei has asked me where I was aiming, and my mind draws a blank, because I totally forgot to do so!

It's amazing, you hit the target a lot more when you consciously aim.

It is impossible. But you can do it.

Until now I've only been able to do one at a time, but I need to do both. The concentration required is intense, and quiet. Standing there at full draw with all of the tension of the bow between you. Parts of you begin to shake. Eyes staring through the bow in straight into the target. Relaxing your core, rising from the solid trunks of your legs, to your chest and shoulders spreading impossibly outwards, extending your skeleton beyond human design. Slowly the breath is leaving you like a small gas leak, expanding from your tanden (dantien, center 2-3 inches below your navel) in reverse breathing. There in that moment, you split your mind in two, one for each hand. On your left hand you are pressing forward with the base of your left thumb in order to launch the arrow forward at the release. On your right hand, you are preparing to drop your elbow and release your hand forward.

That tension explodes, shooting yourself out of each hand in opposite directions, as well as up through the crown of your head. Your chest expands out, breaking from the center of your heart.

SMACK! The sound of the arrow piercing the paper (or plastic) target.

Split your mind in two while doing something else completely. It feels less like a man doing two different things, and more like God tending to everything from the sky at once. From the sky, in the middle of your mind, deep in your heart, located in your tanden, which exists nowhere, and everywhere.

Kyudo is irrational science. The result is magic.