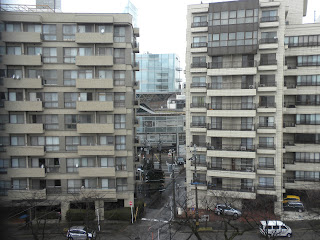 Where do I begin. I'll start with what I see, and then tell you what I did.

I have a great affinity for the rain. I grew up in the Pacific Northwest of the U.S. If you know anything about the region, you know it rains more than anything else. I grew up on a small rural island there. It rains a lot. When it does, it's beautiful. The rain falls through the grey clouds and onto a monotone of green forest in fog. One cannot clearly see where the dark green forest ends and the clouds begin. I used to look out my back windows at the stretching yellow field that rose into a mountain. I grew up in that beatiful rain.

Now I live in Toyama Prefecture located on the Sea of Japan. If you know anything about this region, you know it's also famous for its precipitation. It's raining, but it falls on grey and brown buildings. You can see clearly the slime of civilization escaping the cracks and running down the sides of things. The streets are wet, making the cars loud. Riding my bike is hastened to escape the wet, and not without streaks of puddles splashed up from my back tire onto my ass, seeping through my pants. People walking on the sidewalks aren't looking around them and are instead hunched over staring at the ground, trying to escape the rain that surrounds them. The work doesn't stop, it just makes transport more difficult. That empty floating space is filled with inconvenience and hurry. People's faces naturally distort under such undesirable circumstances. People are rarely attractive in the rain. In fact, people are ugly in the rain. Civilization is ugly in the rain. I need green hills and fog. Now I can think of nothing but the dreary sludge of my day. I want to naturally slack in the rain, but as a teacher, I cannot do this. My students will slack further doing nothing, or go crazy under my lack of care. I must be 110% all the time no matter what with them. Teachers have great responsibility indeed. You don't see this when things are good.

Speaking of snow, there is a great lack of it in the city despite being mid Febraury. Actually, the mild winter we've moved into here is throwing the rest of things out of shape. The branches of the sakura trees are already changing color, to a kind of haunting red-pink, reminding me of agitated nerves reaching into the grey sky. And there are mosquitos! I found one in my bathroom this morning. I went out on my balcony and saw tens of them hovering in the air. I pity any nature that is waking up, because it will die in the next heavy snow.

I went snowboarding in the mountains yesterday and it was amazing. Sunny blue sky, white mountains, powder snow, too many people, but one can get over it in such circumstances. Yet the dreary Monday morning down here is almost unbearable.

Sensei didn't come to kyudo this morning, so I was left to my downward spiral tendencies. I started the day off well, but gradually dug myself into a hole of bad technique. How does that happen? One of the other teachers was there trying to help me, but he was giving me information directly contradicting what my main Sensei usually says. Perhaps they're saying the same thing, but it translates differently. I never really experienced this in other martial arts. Kyudo is a prickly bitch sometimes. Yelling at it usually doesn't fix the problem, but sometimes doing your best doesn't seem to either.

Kyudo is like sailing. (Not that I know much of sailing, but I really don't know much about kyudo either, so what the hell.) When wind fills sails, and you're cutting through the water, even more so due to your efforts, it feels great. You're passing through the beautiful ocean, but can't even see around you because you're moving forward so fast. However, when that wind is absent, you're left fumbling to compensate, but the efforts only drive you further down. In the end, you're on a bit floating, maybe backwards. Staring at the endless nothing around you. "Why?" You ask the gods. No answer. That's how kyudo felt this morning. I've said for so long, "Just go to practice! The results will come!" Well I went! And it wasn't immediately gratifying. Maybe I'm investing in good future karma. Maybe it was perfect. Maybe it was totally worthless. Maybe it doesn't mean anything. Maybe it was a huge waste of time because I want to sleep and write, not ride trains in the rain to toil and work.

A rambling post for a wet gaijin trying to make sense of this city rain. Why doesn't anyone else here understand. Today I hate the street that lies between my apartment and the train station, and the walk from the bicycle garage to the ticket gate.

I'm investing a lot of hope into this hot cup of coffee I've just made.
Posted by Zacky Chan at 1:45 PM