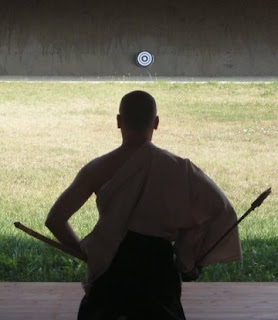 (picture found at http://www.japanese-archery.org.uk/kyudo.html)
This was one of the first riddles to get over in practicing kyudo. What's with all the tension?

For a few years practicing tai chi chuan and then aikido, the number one thing I was trying to do was learn to relax my body in movement for maximum results. Relaxation, of the body as well as mind, is also important in kyudo ... but there's also a lot of tension.

I first noticed it in just watching my teacher walk to the target in the traditional fashion. It wasn't necessarily rigid, but tense. Then in preparatory motions and non-motions before the shot; he seemed the taut string itself strapped on the bow, pulling the wooden ends back. Then actually pulling the bow, the subtle sound of it all puts tension into the viewer. He stood there at full draw, eyes focused on the target sharp as his body was frozen, so frozen it shook it a bit, holding the arrow back, and then SMACK! The arrow was gone, and he walked away just as he had approached, tense.

Tension is not the exact word, but the best one I've thought of.

In Japanese it's way more ... difficult to explain. In Japanese they tell you to maintain a certain amount of kinchou, 緊張. When you look it up in the dictionary, it translates as "nervousness, mental strain", and more accurately to this point, "tension." It says tension, and it is also what I'm saying, but it's a little different. Maybe it's exactly the same, but I think it's a little different. Tension has too much of a negative connotation; like it's a description of a symptom, instead of a painting or a musical note, which it seems more like to me.

The first time Sensei told me to maintain the kinchou, I automatically thought of the "nervousness" translation, because it's all I knew. It's the common word for "nervousness".

Thinking of it now, between English and Japanese, I almost think "nervousness" is closer than just translating it as "tension", though it has nothing to do with the English "nervousness" and most exactly as "tension." Is that weird? That may be just me. There may be some truth there, of the difficulty in translating the feeling between English and Japanese. I don't know. But it's how I feel, and in budo that's a very important thing.

After experiencing the tension of kyudo while watching sensei, I felt it first-hand when gripping the bow. I held the bow in the right posture, but Sensei told me to flare out my elbows, creating kinchou. He told me to do this by haru-ing. 張る. This is a verb that translates as "to stretch". (I can't help but notice a resemblance between this kanji and 引く which means "to pull".) It's not just "stretch" though in English it is, I feel. It's a stretch that creates tension, much like a taut string. Yes, "taut" is another important word in English. So I flared my elbows out to make my triceps taut, while stretching my spine vertically (just like you should in other martial arts and meditation, as if the bottom of your spine is reaching down to the center of the earth while the top shoots through the crown of your head to the sun), and then Sensei also told me to flex my buttcheeks together, turning my pelvis up (much like I've learned in tai chi chuan), which makes you more ... tense.

When you pull back the bow, it's tense. I learned the tension of the string very thoroughly when feeling it slap my face when it pre-released. There is a lot of tension in kyudo which can be built up and used for good; releasing, seamlessly shooting the arrow straight forward into the target. Or for evil; as it warps your posture.

Perhaps that last bit is the biggest trick in the art: learning how to deal with the tension so that it helps your shooting instead of inhibiting it. Your placing tension in the right places, while erasing it from the wrong. Perhaps there is tension in tai chi chuan and aikido, but it's different.

Back to walking. Before you even begin drawing the bow back for the shot, you must walk. When you walk, you slide your feet across the ground, making sure to not lift your heels. The steps are shorter than you would expect. Your body weight is ... forward. The complete opposite of kyudo walking is sliding your foot forward with no weight, and then following it (perhaps what you learn in ba gua!) you push your weight forward, like you're falling. But you don't push with your upper body, you push with your tanden, your dantien, your center (2-3 inches below your belly button). You walk primarily with this part of your body, and apparently walking is one of the most difficult things to do correctly in kyudo. They say learning to do ... something (can't remember) takes one year, learning tenouchi (left hand grip on the bow) in three years, and walking in ten. You walk with your tanden.

Your tanden is arguably the most important part of kyudo, and something you need to keep tension in.

Interestingly enough, my teacher says one should do reverse-breathing while practicing kyudo. (When you inhale, your stomach comes in, pushes out with the exhale) which certainly deals with tension. (Go ahead and try it!)

So you keep this tension when you walk up to shoot, while you shoot you maintain this tension with your breath. After you shoot, it is a great release of pressure, but you don't let it all out. You maintain some tension.

Or else you'll die.

(No one has ever said you will die if you don't maintain tension after your shot, but there is some truth in the statement.)