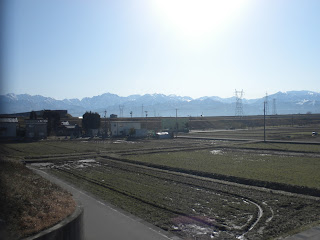 It's finally come! I've waited long, yet the arrival feels abrupt. BAM! Sunny weather and tolerable temperatures to rip through the wind on two wheels. The snow has receded just enough to give me passage to the foothills here in Toyama. A random day-off in the middle of the week couldn't have been more timely, and today I made my first real adventure of 2013. 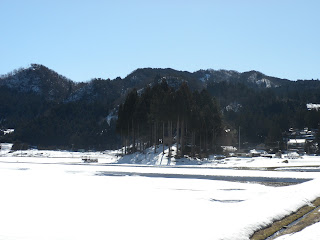 An island of trees. Amid clearings of rice fields, one can always find a shrine where cedars sprout upwards.
One year ago, I entered my first spring living in Toyama City. It was the same prefectural home I had had two years prior, yet I was separated from my normal riding grounds in the east where adventure lay only about fifteen minutes to the mountains. ﻿In Toyama City, it's a tedious one hour until the real fun, yet the adventures compensate adequately. Each month I discovered new routes into the mountains while losing myself on their one lane roads and pouring over various road and topographical maps. Despite the latter, the former seemed more frequent. I closed the year, along with most of the forseeable journeys completed. Plans have been made to evacuate Toyama for a new version of Japan in Kyushu as early as June, but it seems such a move will happen in late summer to early fall. With all this time ... where will I go? 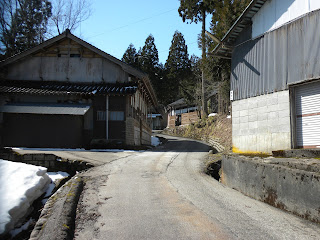 A bit reluctantly, I opened my Toyama mountain guide book to look for places I didn't believe existed. Yet it was only minutes until I had already planned enough trips to fill few months. This place is certainly not dry yet. I plan to make the most of my time here, and I don't think I'll be lost for mysterious mountain destinations. Spring is floating up the mountains devouring snow, but it's quite a slow process. I found the smallest of the mountains assuming it had the least amount of snow, and so today I went up Hageyama, 466 meters high in the Kamiichi area of Toyama. 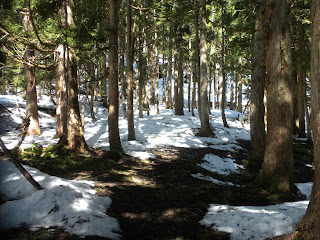 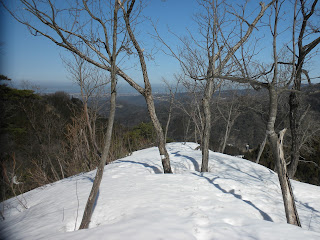 ANYWAY ... it's been a long dirty winter. The seasons mean different things to each of us. This is something I have a great amount of interest in. I'm very mindful of the changes of the seasons, and enjoy tracking its effects on the human world: mostly, my own. Very often, the winter is a quiet time for me where I enter some kind of hibernation and refrain from doing a lot of things. I had my hibernation, but it was cluttered and fanatic. Then I took on a lot more extra responsibility for a couple months making me busier than ever. Now, I'm looking forward to the spring in order to start over, with a lot less, doing what I want. 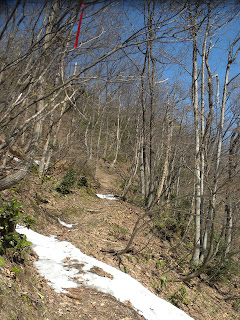 What I want has to do with ... less. Throwing out all of the superfluous crap I've hoarded and constructed, or inadvertantly accumulated, and making room for all the good stuff to happen. This is where Zhan Zhuang (standing meditation) comes in. Though it is an activity of itself, which requires energy and time, it is a great purifier, aligning me to be in my life as I ... am, and allowing me to avoid all of the stuff ... I don't need to do. It's not like there are lots of physical objects to get rid of, or habits to stop, but more so making a shift in perspective. Yet it's not just an instantaneous shift of viewing the world which will change it all for good, but rather the maintanence of a kind of being where I can live in a way that ... I prefer. That preference is not just "me" and "what I want", but also about accepting "what I don't want" and all of the outside phenomenon of the world, for better or for worse. 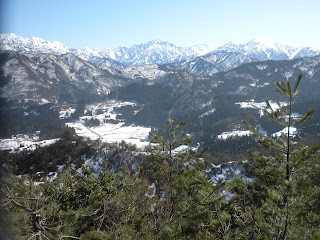 It's about action. It's about being. Thinking is important, but it's a tool to be used appropriately. Thinking certainly cannot be underestimated. However, I feel my young adult education in Japan has been teaching me to act, and then think later on. I make plans, I have ideas, but if I get stuck inside of them, I lose myself somewhere other than where I am for the most part. It's a strange quandary: I would like to write about it all, but if I just write about it all, then I won't be having the experiences that make life worth living. But if I just go out and experience, then I won't have time to write it down for the world. I have never regretted putting down the pen and picking up the bike. Perhaps this is the trick of life. We put our own personal style into the world by how we make our decisions. No one person will do something exactly the same as another. Often, what two people do can be completely contrary. Many people will stay inside to hone their craft away from the world. I, however, will abandon my craft for the world. This is apparent in everything I've ever done, and perhaps a curse preventing me from specialty in one specific area. Doing this, saying this, thinking about this, this is very much me. Perhaps I will never be rich or famous like I've dreamed, but I know I'll be happy. 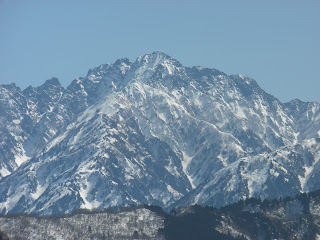 Tsurugi-Dake, not the highest, yet arguably the most impressive mountain in the Northern Alps. A feature of the ride I enjoyed from beginning to end.
Back to Zhan Zhuang. For years I've been in and (most often) out of the practice, but two years ago there was a period of three months I was able to stick with the practice almost everyday. That's the longest single period I've ever done it for, and it felt amazing. How was I able to maintain it? By starting very small, and building slowly. As I've said before, I think forty minutes is the ideal for me, but going from nothing to forty, and expecting to maintain that is foolish for me, I know I won't last. Instead, I will start much smaller than what I can actually do, and build at a pace unrecognizable from day to day. Small accumulation. So I started at 5 minutes two days ago. It's over before I realize it, and that's ideal for the beginning, I think. Yesterday I did 6, couldn't feel a change. Today I did 7 atop the mountain under the sun before the view of Tsurugi-Dake, and it was amazing. By the time I get up around 40, my body will have naturally adjusted to the practice and I will have re-learned how to incorporate it effectively in my daily schedule. We'll see how it goes. I'm very excited about this routine, which is most important. 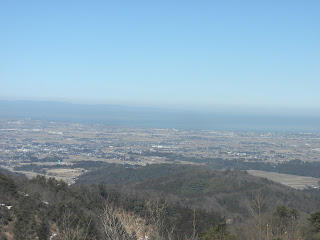 The Toyama Plain where I sleep everynight! Down there in the middle of the horseshoe lies Toyama City, the small city sprawl I call home. In the distance on the other side you can (maybe) see the Noto Penninsula in Ishikawa Prefecture. Very cool.
It's all time and energy, both of which we have a lot of. Or we don't, and it doesn't really matter. Nothing really matters. But that's not true. There are quite a few things that really matter, but it feels different when they're mired in excessive mental refuse. Often times I'm shocked at the great numbing. Gasping for air amid the mundane trivialities, it's a sea of grey I could care less about. But rising to the mountains, standing, all falls away with our eyes closed, and we open them to see a few things that really matter. Those things, are certainly enough. They are certainly worthy of all of our human effort. It's enough to make you cry. It's enough to make you laugh. It's enough to make you want to live. It's plainly, enough. 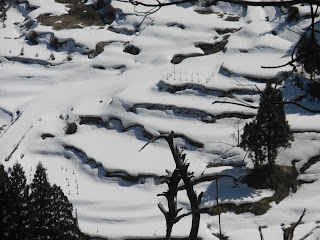