Fear sucks, but it's often said that it can help you improve.

I'll give you a few reasons here stemming from one example: the string pre-releasing in Kyudo.

First you raise the bow in front and above yourself in uchiokoshi. 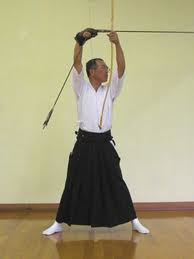 (Dude, I think I know this guy! I found it off a website from Oyabe which is in Toyama. I'm 99% sure I've seen this guy at tournaments. Pictures found at http://oyabekyudoukai.web.fc2.com/shaho.html)
﻿
Then you pull a third of the draw moving into daisan. 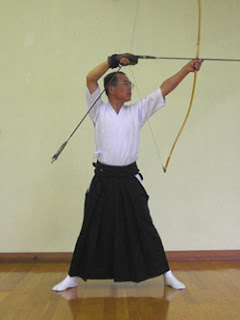 From there you perform the draw, hikiwake, and settle into the full draw, kai, in which you stretch yourself out in both directions for about 8 seconds. 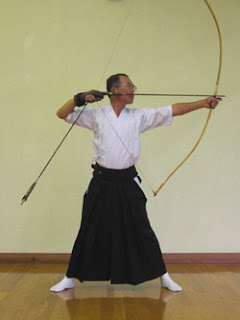 It's usually in the drawing process (hikiwake or kai) that the string can slip out of your grip and slap you in the face. I went through a phase of chronic pre-slipping, and it still lingers everytime I pull in the guise of fear. When the string slips, it either completely ruins the technique or most likely slaps you in the face which really hurts, is a huge shock, and is incredibly embarrassing. This sucks. The prospect of this happening sucks. There is fear, and that initially sucks.

However, that fear can help us improve in two important ways.

First, the fear makes us smarter.

When I enter the draw, I know that if the string slips it's a direct result of bad technique, specifically, not turning my right hand inwards enough to hold the string. When that fear flushes my mind, I know that I must turn my hand to the right degree. So, I do so and my technique is improved by the fear. I have overcome the fear with reasoning and can rest easy with my manipulation of physics in the draw.

Second, it gives us courage.

It's often said that we cannot be brave without fear. I'm not sure if it's exactly that simple, but in this case, that fear does in fact directly give us courage.

After understanding that the string slips out because of mis-applied technique, I should be able to rest easy knowing that the string will not slip out as long as I adhere to the fundamentals. However, that fear still slips into my being. Even though we know that what we fear will not come to pass, we are still afraid. We can overcome this fear with faith: trusting with complete confidence that that string will not pre-release. To take it a step further, we must pull the string with the faith that it will not release even though we don't know for sure if it will release for some reason or not. At that point we must realize that anything can happen and accept that no matter what happens we will be OK. If you're not OK with any potential mistakes, then maybe you shouldn't be doing Kyudo in the first place, or whatever it is you're doing that induces fear.

I've overcome my chronic sting pre-releasing, but still fear it, and so I often go into the draw with the string a few inches in front of my face and then after I have entered the full draw I bring it to touch my cheek, which is definitely not good technique. Instead, I need to make sure my hand is turned sufficiently, and then pull the string back in a straight diagonal line from the daisan to the kai.

Fear can make us smarter and give us courage, but that's only if we're willing to take the time to analyze it and prepare to make our stand against the pain.

Interestingly enough, we could be talking about "failure" and it's the same dark Sensei that threatens our success.

Be brave and smart! That's what budo is trying to teach us.
Posted by Zacky Chan at 12:03 PM