My Two Halves and the "Shaho Kun" 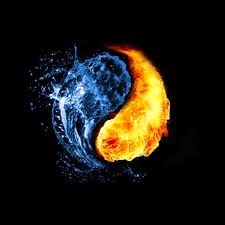 I live in two halves.

One half does this so the other doesn't have to.

One half does this so the other can do the opposite.

Even if this side dies, the other lives on.

If one side dies, another will grow according to that other existing half.

If both sides disappear, it's over.

Because one half isn't doing it, I'm not doing it at all.

But if both halves are spreading equally in opposite directions, there can be one purpose in the center.

So, as a whole, I am fully doing this. 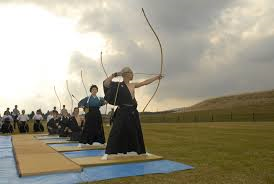 In kyudo we stand firm deep into the ground while also stretching our spine like an ivory tower through the clouds. Our hands must be so supple as to handle towels and flowers and babies, must have the intelligence to know exactly where to be, and must be strong enough to hold the position for all else to bloom. Though those hands have extreme similarities in shape: tightly curled pinky fingers, straight extending thumbs, connection between the thumb and middle finger, they have just as many differences: spiraling in different directions from the arms, one perpendicular to the ground while the other is parallel, connected to the back and elbows one hand is pushing will the other is pulling ... or maybe it's all just pushing.

So much of the time in shooting technique is slow calculated movements of not releasing the arrow. Yet, at the very climax and arrow-head purpose of it all, there is that electric snapping release where finally that shooting action is experienced.

I practice kyudo because it is a way of expressing myself that utilizes civilization. I use my conscious mind and will to practice this one thing over and over again which I learn from others who have done the same. It is cultivation in the purest sense. It is the development of human society. But I also don't practice kyudo in case it's all just a false dream. I put everything into kyudo, and then take it all out. Like blood flowing in and out of the limbs in varying degrees. I do this because one is not enough. Maybe I'm lost.

I step too far mentioning and purposes and such. It's funny that we build a practice around a purpose, when really the purpose may be the last thing we understand.

For more credible wisdom I present below the Shaho-Kun, "Principles of Shooting", written by Master Junsei Yoshimi which is contained within the Kyuhon, official Kyudo Manual. I'll talk more in the future about the Kyuhon, but for now, we'll begin with the Shaho-Kun.

"The way is not with the bow, but with the bone, which is of the greatest importance in shooting.

"Placing Spirit (Kokoro) in the centre of the whole body, with two-thirds of the Yunde (left arm) push the string, and with one-third of the Mete (right arm) pull the bow. Spirit settled, this becomes harmonious unity.

"From the centre line of the chest, divide the left and right equally into release.

"It is written, that the collision of iron and stone will release sudden sparks; and thus there is the golden body, shining white, and the half moon positioned in the west."

-Master Junsei Yoshimi
Posted by Zacky Chan at 11:20 AM