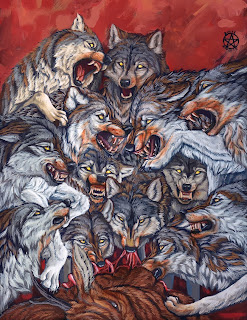 But there's a lot of smoke and mirrors.

Cause that's the point.

With something that orginated as life and death: one person killing another ... the end point is most important ... or the only thing that is important.

But somehow a transition was made, and it doesn't matter whether you live or die, but how you live and die.

Certainly that has some clout ... but if you're dead, nothing really matters anymore, eh?

Dude all of this, martial art stuff, started off and survived as killing. Whoever put the name of art to it. I can consider it thus, but really? The art of killing someone and the art of ... whatever it is martial artists really do ... is really different.

I for one, am very concerned with how I live my life, so it's natural I've been attracted to budo. But then nothing in my life has ever depended on budo-learned life-or-death skills ... and in that respect, I am so completely unrelated to the origins of budo ... perhaps my use of "budo" is improper.

Maybe I have no idea what I'm doing.

One thing I do know, is that I practiced kyudo when I got to Nakatsu and got a blister on my hand and took a week off. I focused so badly on kyudo technique in that time in my head ... and when I came back to the bow I was weaker. Ever since my last in depth time with a teacher my kyudo has crumbled considerably.

This is my current life in budo ... the warrior.

Point being, my ideas in isolation have very little to do with actually getting something done, or being a warrior at all.

And yet a lot of beautiful art is created in isolation.

As budoka, we fail along the path, and that defines the whole, but when put it into words or something real, that loss is subjugated for the potential of the future.

If I focus on the failure now, it takes up time to cultivate the new, so I don't.

But if I spend too much time in that optimistic climb, I forgot all the skulls I've climbed upon and it feels fake.

How could martial arts possibly survive in a world where profits are the only focus. No matter how high we stack data and expectations, the earth will condemn us with judgement, equal pain and success.

How could anything survive in our future world?

In kyudo I shoot an arrow at a target for the purpose of hitting it.

In society, an arrow is shot into the future for a goal.

In kyudo, if I miss, it's still all good.

In society, if an arrow is missed, it makes CNN news, which doesn't report anything correctly anyway.

Thank you for indulging in this rant, since it's the only thing I can post.

Still on the path of budo, and life, but the distinctions feel so much like limitations, and anything at all seems like just a little too much trouble.