Wings burst from my back and tore apart paperwork chains. So many scars made in waiting, forced to sit. But on that day, the train doors spread apart and I boarded the vessel perfect. Toyama gone. Riding the spine of Japan far to the south, I've come to a land of a different color. Enter Kyushu.

I made it! Actually, I did a little over a month ago. Yesterday I finally got internet. (Why in a country so technologically advanced does setting up internet take so long? Is it like that everywhere? I've forgotten.) So now blogging may resume.

But I warn you, it won't be the same. Because this is Version 3.0. I want it to be different. Surely something has changed in the transitions. It's only half true humans desire security and routine. That other half, the unreasonable need for something new, for everything to be new. That wretched creature is what brought me across the country, for that prophesied New.

Anyway, for simple introductions, I'll just give you the facts. 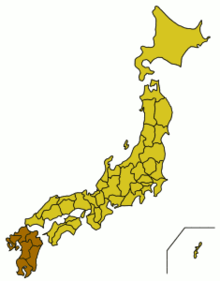 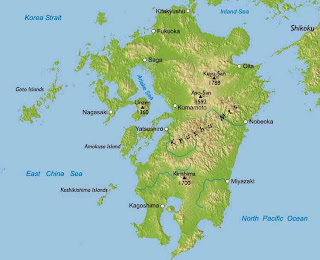 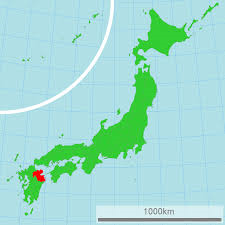 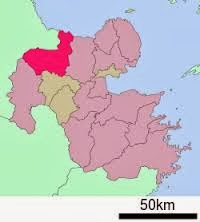 It's nice. It's what I wanted. But as I'm not exactly sure what I wanted, I'm not really sure what to make of this place. It is going to take time. Much of it is veiled away from me, and so I'll patiently walk, eat, sleep. This is OK.

Every morning I wake up, and I'm not really sure what to do. I like that. It's going to be a bit more simple, and slower here. The last two years in Toyama City was an experiment in overwhelming action. "Everything all at once, now, and forever because I said so!" I'm not sure how much I accomplished, but I do know it was way too much. Now that time has passed. It's actually gone. And that gaijin is dead, off in whatever heaven he wanted. Behind white curtains, in this new simple white and earth-tone apartment, on a late fall overcast afternoon, a new gaijin sits.

I'm continuing Kyudo, but it's been a bit of a rough start. Probably the most exciting part of all this moving is the new introductions. I walk into the dojo and everyone is new. They see me and we talk, and they seem impressed, that's interesting, but my timing and technique are not settled. Though I've been going to the dojo for two weeks, I barely feel I've started. I was careful to not go too hard at first tearing blisters in my hand, but the blister came, I didn't wait long enough for it to heal. I went anyway, and it's torn open again. I want so badly to push through it, but I know it won't work, because I've done this before and it didn't go well.

Should I go despite all cautions against? Sometimes I really want to. But I have the experience, I have a thinking brain of my own, my life is based on my own decisions, I do kyudo because I like it, so I'm now making an executive decision. I'm passing a law that reads: I will not go until it is healed.

There, we are our own gods.

I remember the last time I hurt my hand and I asked people what I should do. I just wanted them to tell me I should rest, because it's what I really wanted and I wanted it to be accepted by the others. I wanted to take out my own responsibility of the equation so if something went wrong I could point the finger.

Fuck going to kyudo because I want my hand to heal and do kyudo when it's fun.

Fuck begging for others' permission because I am the one responsible.

So yeah, I'm going to take a few days, which should probably be more like a week so I can go in with new skin and start over. What's the rush anyway? I'm the one I do kyudo for. I have my whole life to practice. What would I do with an even more serious injury? I'm just training myself to push through pain though the results are not worthy. I can take a week off.

The dojo is huge, clean, and full of talented kyudoka (people who practice kyudo). However, most everybody goes at night when I have to work. I now realize how lucky I was in Toyama having the main sensei show up in the mornings at the same time as me. But, I'm sure things will work out. If I want them to, they will, I trust.

But for now I wait.

I also wait for a much greater prize. That treasure that defines my move to Kyushu more than any other single phenomenon, my wife, Satomi.

She will finish her job in late December and then move here. That leaves me two months to be in my apartment trying not to dirty it up or do anything too stupid, which may be impossible. Satomi came here for a few days last weekend and it was amazing. It was what this place is supposed to be for us, but alas she returned for the month long homestretch. More than dreams, ambitions, and chores, there is a person I love. That human life to me is more than priceless. It is worth such an invaluable amount that all else could burn and I'd still smile to be with her.

I'm here. Things have changed, I'm just not sure exactly what and how ...

so stay tuned! And welcome to Kyushu.
Posted by Zacky Chan at 2:49 PM