Part III: "Of the Flies of the Market-Place" 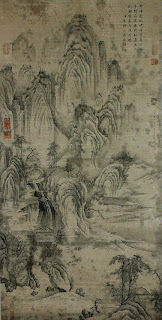 Part 3 of the similarities between the book, "Thus Spoke Zarathustra," by Friedrich Nietzcshe and Taoist thought.

The plot of "Thus Spoke Zarathustra" is about a man, Zarathustra, who struggles to live in society and thus searches for a better life, which most often takes him to the mountains in solitude. Zarathustra essentially becomes a mountain ascetic, which is a very prominent role in Taoist philosophy.

Nietzsche writes in the section, "Of the Flies of the Market-Place":

"Flee, my friend, into your solitude! I see you deafened by the uproar of the great men and pricked by the stings of the small ones. ... Forest and rock know well how to be silent with you. Be like the tree again, the wide-branching tree that you love: calmly and attentively it leans out over the sea. "

Then he continues to explain the fickle nature of man in the market-place and his dainty values. Worshipping the newest, latest, and most popular is rank of the mob mentality, and not of true quality. Isn't "good taste" often just the mimicking of another's words? Often it seems one must be knowledgable of the latest gossip in order to be on top of their respective obsession. A fickle world balancing upon the whims of the charismatic and terrifying. This is a notion perceivably small from a wider scope that sees more virtue in rocks and flowers. To the immortal qualities and tendencies is where I believe a Taoist looks for wisdom; and thus does Zarathustra.

Here I can't help but indulge in the image of someone amidst their solitary morning practice of martial forms and meditation, searching the deep well within constantly every day for that small gem of new inspiration or knowledge that may appear from their constant training. For this quest has less to do with glories, fancies, or attractions of society, but rather within themselves. Perhaps this occurs surrounded by the subtle beauty of a quiet forest or empty tatami room. It seems the constant and steady progression befitting of a student would appeal to Nietzsche.

However, such an image is not so befitting to Nietzsche's passionate writing. As I have attempted to reveal parallels between the Taoist life and Nietzsche's ideals, his writing is markedly more aggressive than what one would usually find from a monk of eastern religions. I find an attractive grit and audacity to Nietzsche's thought process. Perhaps maybe a Taoist priest blasting Alice in Chains through a large stereo would be a better description of Nietzsche.

With such a powerful and very fitting passage of Nietzche's, "Of the Flies of the Market-Place", I conclude this entry:

"Flee into your solitude! You have lived too near the small and pitiable men. Flee from their hidden vengeance! Towards you they are nothing but vengeance.
Your nieghbors will always be poisonous flies: that about you which is great, that itself must make them more poisonous and ever more fly-like.
Flee my friend into your solitude and to where the raw, rought breeze blows! It is not your fate to be a fly-swat.