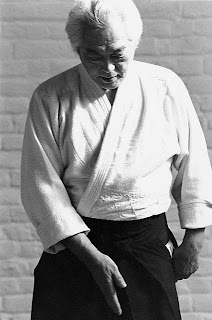 AKA Kobayashi Aikido is the style I am currently practicing. It is a second generation style of Aikido (created after Ueshiba Morihei died). That is what I found out tonight, soon, I will investigate further about the styles particularities.
Also, I was practicing a technique that was dangerously similar to bagua zhang! And tasty! A dojorat told me that I would be realizing the similarities between the two arts, tonight that certainly happened, and I am starving to eat mat!
Posted by Zacky Chan at 10:46 PM