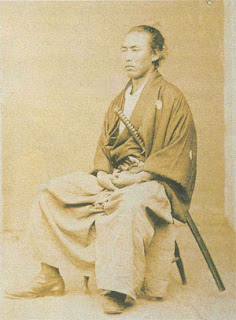 After many years of being an avid student of Japan and history, I am amazed that this man, Sakamoto Ryouma, had escaped my knowledge until only a month ago. His image is known to all Japanese, and yet, like most in the limelight, not many know actually what he did to acquire such reverence. Though I am not enlightened on the subject, I am better informed after reading "Ryoma: Life of a Renaissance Samurai" by Romulus Hillsborough.

Like inquiring magnets, my eyes have daily been gravitated to my school's Japanese history teacher's desk. Immaculate, mass volumes tidied, rare copy map of feudal Japan under his clear desk cover, and his presence often missing, there is one other detail that deserved attention above all. Within a frame standing atop the mountain of Koshiba Sensei's realm is a picture, that is actually the composite of a jigsaw puzzle, sits a samurai sternly squinting into oblivion. The samurai image is ubiquitous in Japanese culture, modern and traditional both, and yet this man haunted me daily since my first steps in the room. Soon I asked his name, then ordered his biography, read it, and now I sit amazed at his life.

In mid 19th century Japan, the Black Ships of the U.S. anchored off the coast of the island nation with guns pointed towards land demanded the long-introverted country opens its doors for trade. While enraged samurai of southwestern Japan who supported a xenophobic emperor would gladly sacrifice their lives to keep the disgusting and shameless barbarians out at whatever cost, the corrupt and hoarding Shogunate bakufu would sell Japan at any price to protect their weakening control. Few well-educated men sat between the chasm of these fatal positions, and only Ryouma could be the one to pull the seperate Han (regional domains) together to defend Japan's honor by cooperating and not subjugating to the Western powers.

What I just wrote was painfully vague and generalized, but that is my attempt for now of paraphrasing what I have read from Hillsborough's wonderfully written 602 page detailed account. I highly recommend the book, or at least some examination of Sakamoto Ryouma beyond this limited blog entry.

But here I will briefly mention some qualities that Ryouma displayed, that I hope I never forget, and that the World need adopt as a whole to evolve from our self-destructive state.

By looking beyond traditional cultural superstitions, Ryouma held Reason above all else, and had the courage to defend it regardless of its unpopularity or foreignness. This lead to a devotion to democracy in the place of a caste system, and cooperation with Western nations for mutual benefit instead of rashly murdering or committing suicide for a culturally biased honor system. Ryouma also maintained the courage to support such alien ideas, though it meant abandoning his samurai status for the life of a ronin to pursue his goals, and dodging daily attempts on his life, which in fact finally got the best of him.

It seems time and time again in history through bloody civil wars, heroes often emerge to forge an evolved future for their people, but they are quickly forgotten. For hundreds of years people have stood for peace and rationality, but we still fight wars over ignorance and greed. In such a light, I feel helplessly faithless in the future of humankind.

P.S. You see his rockin' leather boots? He's also packin' a Smith & Wesson under his Kimono.
Posted by Zacky Chan at 9:23 PM