Return of the Gaijin 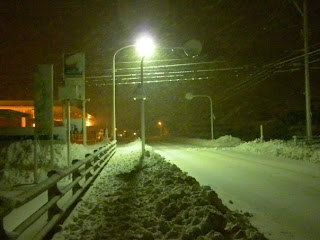 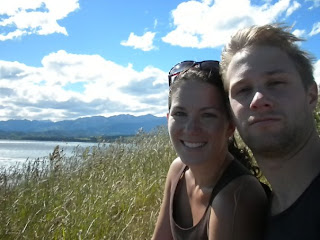 If you were to ask me one month ago, I would lavishly say "Oh yes! There are SO many similarities between the two wonderful countries. To love one would be to love the other!"

Now, I leave these two photos as my feelings after a bit of maturation.

Well ... OK; so they aren't exactly the opposite of each other, and the two remarkable island nations DO have quite a bit in common (in some lights). However, from my latest traversing across the Pacific between these two countries , all I can feel are the sharp contrasts. Naturally, those differences can yield hostile emotions. Especially, when one leaves a small surfer's / artists' / trekking enthusiast's paradise town in the Summer time where they weren't working and with their girl friend 24 hours a day who happens to be the obsession of his adoration ... to ... a sideways snowing town of rice fields at 4:30 am (the sun will not rise for another 3 1 / 2 hours, and set 8 hours later ) to teach the wonderfully nonsensical language of English.

Well ... OK; so I may be exaggerating again. But for obvious reasons, can you blame my bias? In fact, shouldn't such an endeavor that so strongly stings us to reveal our most exaggerated of states be desired? Are not lonliness, feelings of inadequacy, and irrationality states to be sought after? And should I not express these as truths to my peers? For years I have been told by my predecessors, "No matter what, you will screw up, and you will screw up often. This my friend, is inevitable. "Well, I believed myself to be an exception without a pubic hair of doubt! And now, I feel these" negative "feelings while whipping between extremes. Very few values remain consistent between galaxies. So, what is the point of living as a Saturnian on Mars? In the millions of light years between these outposts, I would spend my time burning what I will not need, and studying that which I will be. And that which survives the winter , well, it may be worth keeping.

I think such an epic analogy fits the situation. Just look at the pictures!
Posted by Zacky Chan at 7:32 PM