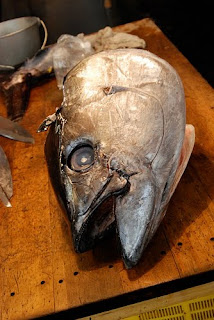 One of the guys at Aikido just got married a bit ago, so it was only right for him to have a party with the Aikdo crew, which happened last night. It was well advertised at every class for the past month, and at first I was hesitant about going, but soon decided that it would definately be a bad idea to miss for many reasons. These types of dinner parties are certainly ubiquitous, and almost as much mandatory for people to bond outside of class or work. It seems, to avoid these parties would be a bit of an offense to the people, and seeing as I'm trying to get as close as I can in able to learn as much Aikido as possible, and I'm obviously different as a gaijin, it is best I do everything possible to find as much common ground. Plus, for an average price of about $50, you get an all you can eat fancy pants meal and absolutley free beer! And, it would be a great oppurtunity to practice Japanese with a bunch of really cool people. So of course, I had to go.

It was a group of about twenty people, so when we entered the restaurant together into our own special room, it took about twenty minutes of awkward milling around waiting to find your proper seat. There were three tables, and because of my gaijin status probably, I was invited to the table with Sensei, the groom and bride, and a couple other cool people. I felt kind of bad to hog the good seat, but I'll soak it up as long as its available, and plus it would be rude to turn down.

After we raised our drinks for kanpai and took our respective gulps, I noticed that the Sensei's took over half of his pint! Well, this should get interesting. The food was amazing and overflowing along with the beer, and the only thing keeping me back from a constant ingestion was struggling to speak Japanese with my neighbors, which really does get better with the right amount of intoxication.

By the way, the picture above is a semblence to what the main dish was, which was a giant tuna head, which was really good. Unfortunately I didn't have my camera, so this was just taken off the internet.

After about an hour, I almost didn't notice Sensei trying to sneak out the door as the party was only getting better, but certainly the others around noticed and all seemed to pounce him, tearing his coat off and pleading to have him stay. This seems to be a well understood and often practiced Japanese custom of someone important trying to leave and everyone else needs to plea to have them stay. I understood what was happening, but was really surprised how long it took, and how much grabbing at arms there was. Especially with a bunch of expert martial artists, it was pretty interesting to watch. 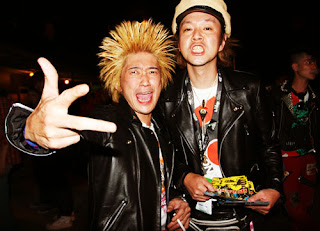 These guys weren't there, but they are quite representative of the ideal karaoke energy I think.

Well, debauchery increased, and I soon realized I was going to be much more full and return home much later than I expected. How we ended up going to karaoke afterward certainly surprised me ... and also didn't at all. Everyone sang, so of course I was involved. I tried to pick something I knew that they would too that would be American and maybe they could appreciate, so first I picked one of my favorites from the Red Hot Chili Peppers, and no one had ever heard it before. So next I picked the Beatles, and I actually don't even remember what I picked, but everyone was surprised there was a song by the Beatles that wasn't called, "Let It Be." It was pretty awesome to see everyone so relaxed together, but also weird when a stranger with his shirt off came in attempting to join the fun, but I got really tired of him rubbing his sweaty chest on my and screaming in my ear. It was also of great satisfaction to see the Sensei with his head in his hands with an extremely finished look on his face while he continued to hang for more beers and student's singing.
Well, eventually a train was caught back, my bike was ridden home, freshly cleaned futon covers were frustratingly wrestled over their futons, and I went to sleep only to wake up a few hours later for school. However, I didn't feel so bad, and I look forward to training tonight to see how everyone was.
I would surely feel stupid to show up and listen to them go on about the party had I not gone, and instead I can show up as one of them.