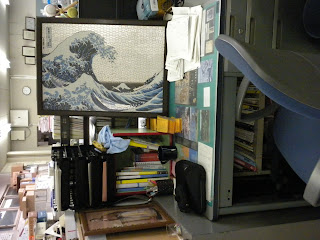 (the office where I secretly read Aikido books)
Tonight the Sensei along with many of the students showed up an hour late for whatever reason, so I got a lot of time with other high ranking black belts to help me wipe and scratch my face on the mat for a bit. However, the most fun and interesting part of the night came when the Sensei arrived and demonstrated a move for us to do. To me, he appeared to be frustrated that he had come late as well as at whatever kept him late, and you could sense it in his movements. After his brief showing of the move, we seperate into small groups to work on them, and of course one of the groups has the Sensei in it. I thought either A.) I should give him a second to get settled in with other black belts first and then burden him with my white belt handicaps, or B.) Just get straight to it ... and that's the one I picked. The look on his face seemed a bit surprised and less than excited maybe, but happy to have an enthusiastic though possibly naive new student. I of course fumbled at first, but am catching on more and more, and happy with my decision to take advantage of Sensei whenever it is possible.
On the same note, last Thursday's class was cancelled due to a holiday, but I contacted one of the black belts in the class who really has a hard time staying away from the gym, and we met one on one that day for what was the best step by step walk through of techniques I've had thus far here in Japan.
So for all you white belts out there, get at it! And for those black belts, it can be quite a gift to share your time with the poor.
Posted by Zacky Chan at 10:07 PM