The Ten Commandmants of Learning English 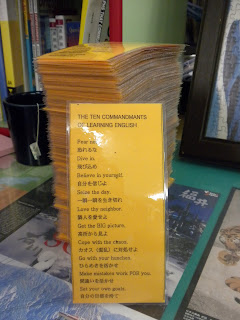 Back in November, all ALTs (assistant language teacher) in the Toyama prefecture met for two days for a mid-year seminar on teaching English. I went to this instead of school for two days, was going to learn some things about teaching, and meet other ALTs I hadn't seen before. There are two very different sides to these qualities, but I was pretty optimistic at the outset. However, the general consensus of anyone involved in the seminar was that is was stupid, boring, and a waste of time. When I walked in and was receiving papers and folders and information about the seminar, the ALT in charge of handing out the info gave me a huge smile and in a very depressingly sarcastic tone said something to the effect of, "I hope your ready for a really exciting two hour speech!" It was at about eight o'clock in the morning, the beginning of what was quite a long seminar, and we were about to listen to a two hour lecture about teaching English, but the comment hammered my optimism down a bit, and was annoyed at the girl's need to say something clever or whatever.

As a side note about many people that belong to the same generation as me, there are quite a few inside jokes stemming from recent popular culture like facebook and the TV show "Arrested Development." As a result, I have a lot of peers who only know I exist if I'm their friend on facebook and make some reference to "Arrested Development" at least once an hour. I think it makes for a specific demeanor and sense of humor that was ubiquitous for the duration of the seminar.

OK! What does this have to do with the Ten Commandmants of English? Well, this was a wonderful gem that I found amidst a desert of a two hour speech about teaching English. In a handout given to me, there was this list of "commandments" for English learners as well as teachers, but I went with the one for learners, as I think sometimes teachers understand better as learners. Anyway, I lost the paper after copying the list down, so I don't know who to cite or thank, but whoever came up with this idea is a very smart person.

I had many epiphanies in this seminar, but realizing the importance of this was one of the biggest. Learning a foreign language is hard for most people, and being reminded of these ideas can change a whole lot about one's attitude, which is a whole lot of learning. I believe if I would have had this when I was taking Japanese language classes in college, I would have been a better student and would now be better at Japanese. But that's just hindsight. I use it now and am slowly reaping the benefits.

BUT! This epiphany manifested into a great project, which was translating these into Japanese (Thanks to one of the greatest Japanese Teachers of English on the planet, Mr. Terao whom I work with) and then making a small personal copy for every student at my high school. It was an epic quest in and of itself, as I printed nine copies of the "Commandments" onto sheets of orange paper, cut each one out by hand (the school's big paper cutters are absolute crap) and then lamanated them with a lamanator that the past ALT bought, which is awesome by the way. Yes, two weeks later, about 700 were made and sitting on my desk.

THEN, I gave them to the students. At first they looked at it in a very confused manner. I explained that it was a present for them that I made in order to help them with English. Some were happy, some were bored, whatever. Well, this wasn't just another hand out in English class, this was a precious treasure made with the sincerest of intent for the great task of learning a foreign language. So I began talking to the class in Japanese. I have NEVER had a class so quiet and focused on what I was saying. As soon as I said "watashi" (I), I had them. I explained that I have studied Japanese in college for three years, and practice diligently every day, but I still make mistakes everyday and get very frustrated. But, if you mind these commandments, things can be a little easier. Everyone was very happy to receive them, and I'll be happy to give another round to the upcoming freshmen.

I'd love to explain why I think each of these commandments are so important, but I think this entry is long enough, and who knows what you can come up with on your own.
Posted by Zacky Chan at 11:31 AM