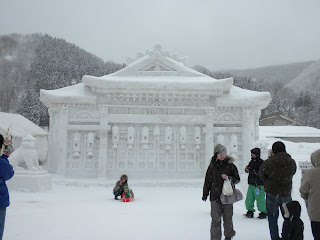 When winters here seem endless and just plain cold, it's time to head to the mountains for a Soba festival. Along with the tasty bowls of Japanese noodles, there were many snow sculptures, ranging from some a few feet in height made by young Japanese children, to epic life 30 foot tall creations that do not fail to amaze. 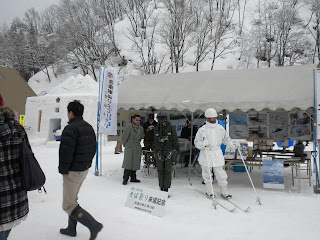 While amazed at the intricate snow structures, I was surprised to what was a large amount of soldiers at the event. After asking fellow gaijins, I gathered it was the national guard, putting their time and large funding to use by having them build the ice structures and strut around casually in their uniforms. 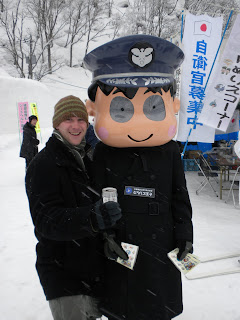 Expecting a large amount of mayhem and debauchery, Gaijinexplorer got on the good side of the authorities early on. 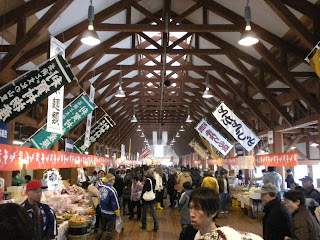 Oh yeah, the Soba! Here is the house of Soba, with many stands serving large amounts of what is now my favorite Japanese noodle dish, as well as other tasty goods. Anyone that has been to Japan will probably be able to tell you about the myriad of mediocre wieners served in all kinds of meals, but here I had what was actually an amazing sausage and real beer! I love Japanese beer, don't get me wrong, but I was truly refreshed after having a pale ale here, which is quite the rarity. 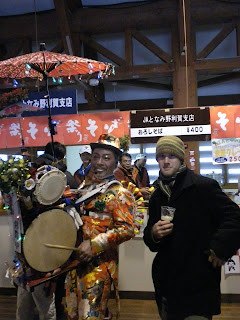 Who: crazy Japanese person and Gaijinexplorer. What: random one man band and interpretive dancer (not shown) spreading smiles and confused looks. When: About three pints deep. Why: I have no idea! 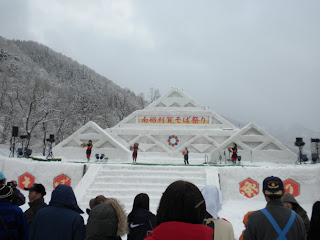 A giant snow stage displaying various performances throughout the day. 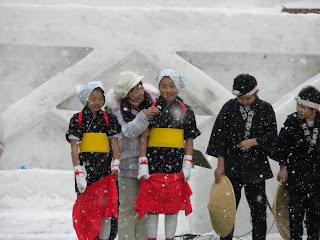 Most of the early presentations were done by young children, who were sequentially interviewed one by one while standing in this chilling snow. Poor kids. I probably heard this MC say "Arigatou Gozaimashitaaaaaa" about 867 times in the most nasal of Japanese pronunciations...I love it and will surely miss it if I ever leave this magical land. 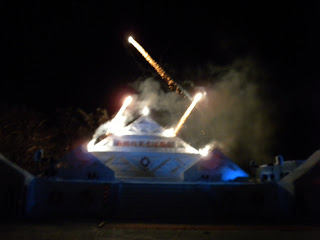 I've never been to a festival in Japan without fireworks, and this one didn't dissapoint.
Hooray for Japenese festivals. It was amazing, I bet I'll be there again next year ... but honestly, its about time for some warmer ones. I'm certainly looking forward to hanami in the spring.