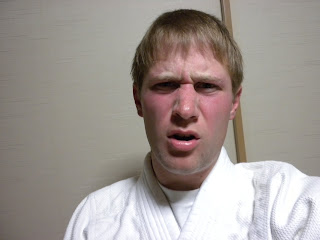 First off, as of yet, I have been the gaijin in the corner taking up half of the sensei's time with me on beginner aikido drills and basics, which is awesome, and to be honest, I've done pretty well with them. However, last night was my first night with everbody else practicing the techniques, and I saw the dark side of the moon, and it was confusing! A few techniques I could do alright, but on one in particular, for some reason was absolutley impossible for me and the sensei, although I believe him to be a very kind and understanding man, was getting a little more than frsutrated with my lack of understanding of both Aikido and Japanese. I'll also note that I've studied Japanese for quite a while now, and am past beginner level, but I don't understand a single word this man says. So as he looks me in the eyes and says as slow as he can what he believes to be the simplest idea, I look at him for the umpteenth time like, "I'm doing exactly what you are! Why isn't this working!" Actually I did understand one thing, and it was something to the effect of, "This isn't Chinese martial arts, you need to listen to my 'advice.'" (adobaisu)
Now, this is all in good training, and inevitable as Aikido is a highly refined art that takes many years to just get the feel of. I understand this, but am still frustrated. In fact, I utilized my 20 minute granny-bike ride home grumbling to myself about it.
Well, there is only one answer. Can you guess? Some of you may say drink beer, and I concur, but also practice by myself and meditate on what I've seen in class! So I depart to whirl in circles for an hour or so.
Posted by Zacky Chan at 10:53 PM