First off, this is my third blog of the day, so don't forget to scroll down to the other posts! If you have the time of course.
Well, this morning I woke up in my regular fashion and made my daily 20 minute walk to school which seemed a little strange today for some reason. Maybe because of a strange movie I watched last night, or maybe the lack of students bicycling to school today saying "Herro." Well, it all made sense when I walked into the office to see only one of the vice principles and one of the other English teachers who were more surprised than me; today there was no school! Whoops, I forgot. Well, we laughed, and I decided to sit down for a little while anyway talking to Terao sensei and having the usual morning tea. Then I returned home pondering what to do with such a day.
I have many things that I could do fill more than just one day, but the most important I think is an adventure. Being strapped for cash, I decided to make it a local trip, maybe just to the beach which is a twenty minute bike ride away. Also, we've had an extroardinarily snowy and cold winter here, but the past couple days have warmed up quite a bit, and today was in the low 60's with the sun shining. So off I went. 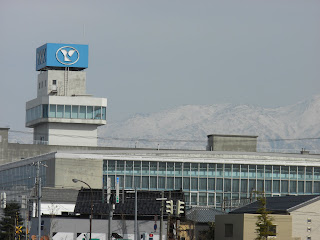 The town I live in, Kurobe, is famous for few things. Maybe one is the Kurobe gorge and dam. Being so close to the mountains, its not a far train ride until you get to the gorge and it truly is amazing, although I haven't been to the dam yet. OK, so besides that, Kurobe is famous for having the headquarters of YKK. Check any zipper you may have on, and you'll most likely find a "YKK" on it somewhere, and most likely was made in the factory shown above. This company is probably the reason for the towns existence, and any adult male you meet in Kurobe seems linked to the corporation somehow. Its somewhat between my house and the beach, so I decided to roll over and give it a look. I have no pictures to do the company justice, but it is absolutley gargantuan. At first I saw one giant factory building, and looked behind it to find five or six more of the same size or bigger. Kurobe's population is about 55,000 people and feels much smaller, but seeing this compound of giant YKK factories explained a lot. 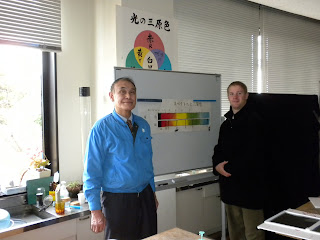 Next to the YKK factory was advertised a "Science Museum", so I decided to check it out. Judging by the parking lot it seemed quite empty, and maybe even closed. I wasn't intent upon going in anyway really, just wanted to give it a look and maybe return. I started walking my bike around a small park with a stream through it that was on the property of the center. I was wandering alone, and was a bit nervous as maybe I felt like I wasn't supposed to be there, and was then shocked to see a young woman from the center jogging towards me giving me a loud mix of "konnichiwa" and "hello". She was also followed by an older man in the same dress. Their urgency confirmed feelings of unwantedness, but was then surprised that all they wanted was me to come into the center! The girl said they saw me through the window and wanted me to come have a look. If the people here are not walking with their heads to the street in their own little worlds, they're running at you pleading to talk or go somewhere with them. Surely I made the right decision to take this adventure today.
Well, we went in and the older man took me to a room with various science experiments on the walls and tables. He proceeded with great showmanship to show me a few. Of three he displayed, I will talk about the first, bear with me. We went to a sink of water where he held a ring with a handle that had mesh wiring on the end. First it was bent out and down, and under the water, he put a glass full of water upside down on it, and lifted it out of the water. The water fell from the glass; that makes sense. Well, next he flipped the mesh wiring the opposite way, up, and did the same experiment; but the water didn't fall! It remained in the glass despite is porous wire mesh bottom. Whether you understand my explanation or not, I assure you it was pretty surprising. He did it a few more times, and then began to explain its reasoning. That when the mesh wiring was flipped down and out, the space between each wire mesh was a bit larger than that of when it was flipped the other way, and was large enough that water would escape. However, when flipped the other way, the size of the holes and the pressure of water allows it to remain in the glass. Aside from being a cool trick, it applies very well to fisherman. When pulling a net out of the water that inevitable convexes away from you, it becomes difficult to pull with the pressure of the water. However, if you have a crabpot that has a bottom that concaves, it will be much easier to pull out of the water. INTERESTING STUFF! At the end I couldn't help but laugh that I was just chased by this young girl and older man so that they could bring me inside and show me science experiments for a half hour. There are a lot of other things in the center that I will surely see later on, with Jolene! 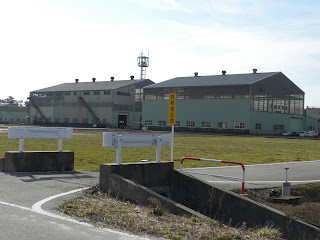 After that I climbed back on my bike and continued my journey seaward. From the center I could of course see YKK, but then also a lot of other industrial factory-ish, buildings all around me as well as rice fields. Before coming to Japan, I imagined central Japan, Chubu, where I live, would be all industrial and a very unattractive and menacing manner, but after coming to Kurobe, I didn't see any of it really. However, if you stray far enough from the main track, you WILL see this side of Japan. Actually, en route to snowboarding in Niigata prefecture just north of Toyama, you will see many many small towns built around their factories, most pumping gasses of some kind into the air, and some completely abandoned due to the recession. Kurobe is certainly enough of other things to make this a bit more exciting, but I should not forget that this is a hard working region with the majority of its young people in factories like YKK, and the older generations in the rice fields that dominate the area. 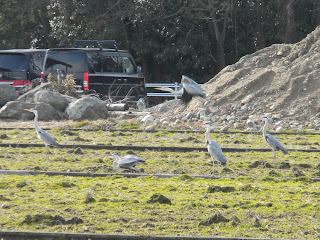 My eyes eventually left the factories, and observed the rice fields surrounding it to find about 40 cranes wandering picking for food. Japan is a country of extremes, and its dichotomy was displayed pretty well here with majestic cranes flying from the decrepit factories. 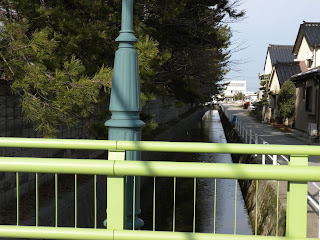 As I got closer to the beach things started looking nicer. More greenery, more water, and shrines! 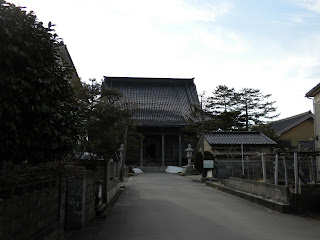 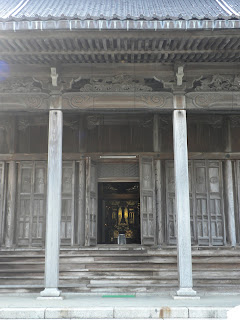 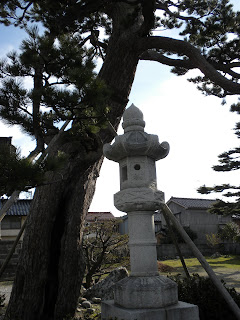 Though Kurobe isn't known for having famous shrines, I am amazed at how many it does have, probably as many as it does convenience stores! Which is a lot, and actually I bet there are more shrines. Each has its own individual quality, and can appreciated as long as the viewer can last. 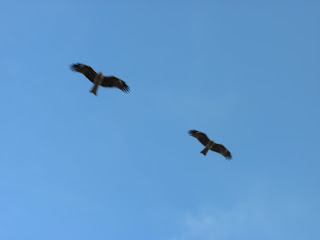 The area closest to the beach is definately my most favorite in Kurobe for a mulititude of reasons, of which would require another blog entry, but today it was my favorite because of the hawks I saw hovering in the wind almost motionless, searching the beach for prey. Just thirty feet above me was probably five of them, and it was pretty cool. 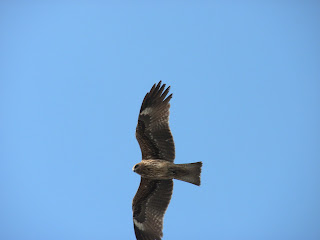 Actually last time I went to the beach, I had left at dusk and was walking through a small forest park and heard an incessant whooshing above my head. I looked up and in the dimming light was maybe twenty hawks fluttering from tree to tree to find their resting spot for the night.
This is a strange and beautiful country indeed. Its seeming contradictions and surprises are amazing. But talk to a Japanese zen priest and he'll tell you it's all One.