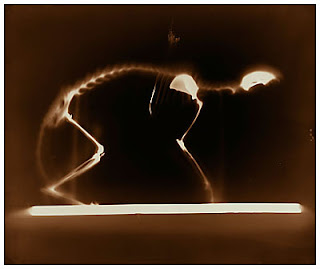 This phrase is often used when describing a quick reaction to a outside force, maybe in catching oneself when falling or avoiding an oncoming object, but I have lately come across a slightly different interpretation.

The other morning when it was still pitch black, I happened to be walking through Kurobe on a road that was surrounded by large rice fields on both sides. I was feeling particularly fresh and alert and happened to notice a cat walking casually across one of the rice fields. It hadn't noticed me, so I made a sound audible enough to get it's attention, but not loud enough to scare it off. The reaction was very interesting. At exactly the moment I made the sound, the cat stopped in its tracks and gently (not necessarily slowly, but not sharply or hurriedly) lowered its center of gravity and looked from left to right in order to find the source of the mysterious sound. At that point the cat was unable to recognize me, so I made the sound again, which was then revealing. The cat sat crouched waiting for me to make a move, and once I began walking again, so did he (or she).

I think this was very telling of an animal so physically adept as a cat. The cat did not shriek, jump, automatically claw, or dart away upon being surprised by a strange sound, but simply lowered its gravity and immediately began looking around to identify it. For martial artists, is this a good way to react against a surprise? It reminds me of a drill for knife defenses in which the attacker would approach his partner and place the blade somewhere on the body to simulate an abduction or robbery. The very first step we practiced was to relax and lower our center, just as the cat did in the rice field. This way, we can assess the situation as calmly and clearly as possible from a strong and rooted base, as opposed to the jumping, flailing, screaming approach ... or even a tensing or automatic attack reflex.

Each to it's own situation, but in this situation I found a translation to this saying which I like better than the one I had understood before.
Posted by Zacky Chan at 3:31 PM