A Day For the Crows 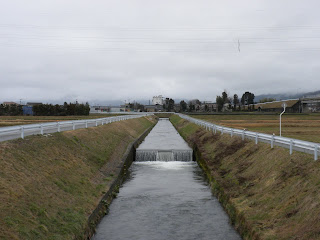 Its funny to think that the largest mountains in Japan are just behind the line of clouds in the distance. To anyone passing through this part of the Niikawa region today, hardly more than clouds, mud, and rice fields would have been noticed. It was one of those days that made me feel back in the Pacific Northwest which was quite refreshing. I felt like it was sent across the ocean for the people of Kurobe to know what its like to live in northwest Washington, but really, this kind of day isn't all that rare, and if anything, Kurobe is a pretty good match for having days where it feels like the sun never really comes up. 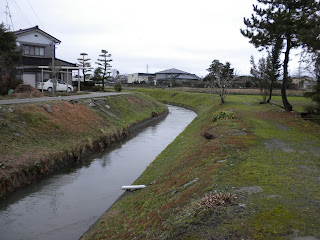 Well, being Saturday and without much cash to spare, it was time for another Kurobe bike adventure. For how small of a city Kurobe is, and the seeming lack of anything but rice fields and houses, every time I go out exploring something drastically new is found. Things are often so compacted in Japan, that its easy to feel like you're looking at a forest, but you don't realize its made up of individual trees. In the distance where you see only houses and rice fields, there is probably another small river (of which there are dozens in this region) or a few shinto shrines (of which there are even more). 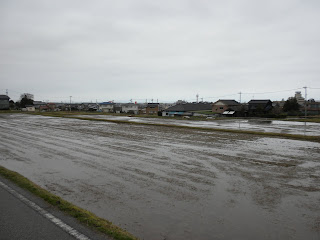 I imagine there are some days when the rice fields are filled with brilliant green strands of life shining in warm golden sunlight ... but that day was not today. 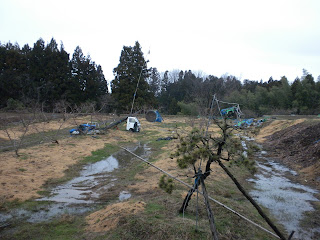 Today I saw a Kurobe that most gaijin don't. Certainly there is great evidence in every town and city to allow Japan the title of being the tidiest country around, but they do an equally good of a job sweeping their trash into the closet where mom can't see. When you do come across these piles of waste in Japan, it often first terrifies me, then I laugh, and it looks beautiful. What do you think. 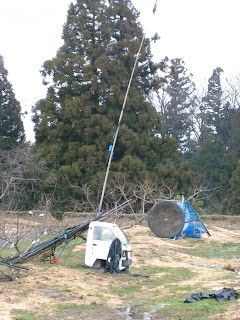 Actually just last night I was out and talking with another JET (fellow gaijin English teacher) who had decided not to recontract. He has been here for a year, and having a good time, but also really sick of his life here. I love my situation here right now, but like Japan, its program for gaijin can have two very different sides. One specific thing that came up was the boredom at work. The job and its workload varies drastically throughout the year, and often from day to day , and depends entirely on where you work, and who you work with. The seniors graduated earlier this week and finals are finished, and now the rest of the school has another two weeks of class until Spring break comes and a new year begins. As a side note, students get about 10 days off while teachers still come to school. Now, it is during this particular time that there is absolutley nothing to do at work, but you still need to show up for your eight hours. I study Japanese and sneak into an English room to practice Aikido, but I guess it drives some others crazy. My friend said its driving him crazy and he just wants something to do. I understand completely, but I'll be on the opposite where if you give me some boring worthless job, I'm just going to sneak off and do what I want. My friends' other gripe was the region. You can certainly find an electronics store beyond your imagination as well as visit some interesting Japanese temples here in Kurobe , but it is by no means a Tokyo or Kyoto. In fact, I'm pretty sure every gaijin that comes here looks around in disbelief, as this is a Japan you've never seen a picture of (well until now). Actually , when I found out I was coming to Kurobe I immediately began researching the location, and all I found out was its next to the biggest mountains in Japan and one picture of a rice field with nothing reaching higher than the roof of a house. I had no idea how the place could be both, but it is, and with a rural working class to inhabit it. To my friend, he called it the podunk of Japan, and seemed less than happy to be here for the last year. Maybe he should have studied more Japanese, joined an Aikido class, or got on his bike by himself a little more. We all have our ways in life, but I think I kind of like this podunk Japan. I did find a couple of really interesting cemetaries on my ride today. For those who have never seen a Japanese cemetary (if that's really the best word for it) they're pretty amazing. Most are stone structures like this, this was the coolest one I saw though. People will leave flowers, but also cups with alcohol. A couple of times I have even found beers sitting as offerings for the past. I hope someone will leave a beer for me sometime, and some gaijin comes up and drinks it. 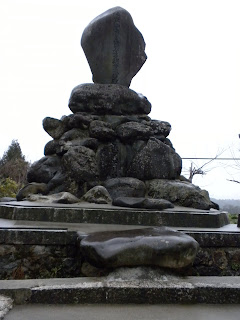 And here's one for the more wabi-sabi types.

For the sake of adventure, no, wait, for the sake of human kind, we all must find a way to explore something new everyday. Some unknown territory that one can be genuinely enthusiastic about I think is necessary. Sure we can live without it , but I would akin it more to rotting. I'm not sure exactly what it is, but something along the lines of something truly fresh and new. As humans we have a natural ability to analyze situations and be able to anticipate the future, that's how we survive. But, to have this quality dominate the world around you, may be a bit too far. I think we know much less than many would admit. That is the unknown we must ride into, and enjoy it if we can , which we can. 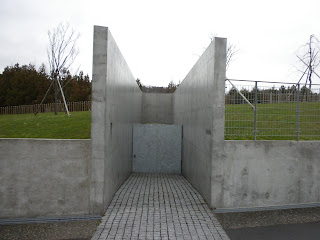 Like a child I was able to explore this backyard of mine with complete wonder. And like a child I felt like throwing a fit to find such a cool looking place like this locked. Its a park of some kind, but for some reason no one is allowed to enter now. I guess I'll have at least one more reason to venture here again.
Posted by Zacky Chan at 11:37 PM