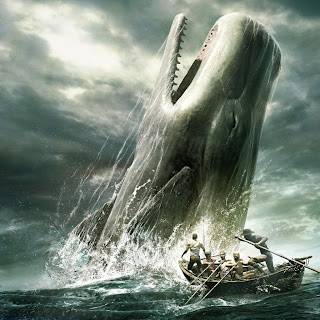 A while back I wrote a few entries on Taoism in "Thus Spoke Zarathustra" by Friedrich Nietzche, and now I'm on to a similar trip with Zen in "Moby Dick" by Herman Melville. I'm not sure if I'm just on a roll reading great classics from the "Western" tradition that are written with a keen understanding of what are usually considered "Eastern" ideas, or I'm just finding those "Eastern" ideas in everything I see these days. I finding contrasts between what is considered "Eastern" and "Western" can very well help ourselves what kind of qualities we exhibit or are drawn to ... as well as many other enlightening things. However, this is a very fuzzy subject without definitions, and in all honesty, I don't really care either ... for clear definitions or evaluations that is. Here I will post a passage from "Moby Dick", and maybe you can find some interesting things in it.

The three mastheads are kept manned from sun-rise to sun-set; the seamen taking their regular turns (as at the helm), and relieving each other every two hours. In the serene weather of the tripics it is exceedingly pleasant-the mast -head; nay, to a dreamy meditative man it is delightful. THere you stand, a hundred feet above the silent decks, striding along the deep, as if the masts were gigantic stilts, while beneath you and between your legs, as it were , swim the hugest monsters of the sea, even as ships once sailed between the boots of the famous Colossus at old Rhodes. There you stand, lost in the infinite series of the sea, with nothing ruffled but the waves. The tranced ship indolently rols ; the drowsy trade winds blow; everything resolves you into languor. For the most part, in this tropic whaling life, a sublime uneventfulness invests you; you hear no news; read no gazettes; extras with startling accounts of commonplaces never delude you into unnecessary excitements; you hear of no domestic afflictions; bankrupt securities; fall of stocks; are never troubled with the thought of what you shall have for dinner-for all your meals for three years and more are snugly stowed in casks, and your bill of fare is immutable.

In one of those southern whaleman, on a long three or four years' voyage, as often happens, the sum of the various hours you spend at the mast-head would amount to several entire months. And it is much to be deplored that the place to which you devote a considerable a portion of the whole term of your natural life, should be so sadly destitute of anything approaching to a cosy inhabitiveness, or adapted to breed a comfortable localness of feeling, such as pertains to a bed, a hammock , a hearse, a sentry box, a pulpit, a coach, or any other of those small and snug contrivances in which men temporarily isolate themselves. ...

... Let me make a clean breast of it here, and frankly admit that I kept but sorry guard. With the problem of the universe revolving in me, how could I-being left completely to myself at such a thought-engendering altitude, -how could I but lightly hold my obligations to observe all whale-ships' standing orders, "Keep your weather eye open, and sing out every time."

And let me in this place movingly admonish you, ye ship-owners of Nantucket! Beware of enlisting in your vigilant fisheries any lad with lean brow and hollow eye; given to unseasonable meditativeness; and who offers to ship with the Phaedon instead of Baowditch in his head. Beware of such an one, I say: your whales must be seen before they can be killed; and this sunken-eyed young Plantonist will tow you ten wakes round the world, and never make you one pint of sperm the richer. Nor are these monitions at all unneeded. For nowadays, the whale-fishery furnishes an asylum for many romantic, melancholy, and absent-minded young men, disgusted with the carking cares of earth, and seeking sentiment in tar and blubber. Childe Harold not unfrequently perches himself upon the mast-head of some luckless disappointed whale-ship, and in moody phrase ejaculates: --

"Roll on, though deep and dark blue ocean, roll!
Ten thousand blubber-hunters sweep over thee in vain. "
Posted by Zacky Chan at 8:07 PM