Why Train With Weapons? 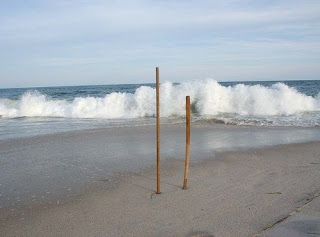 Because they're cool! OK, really ... my favorite is the wave! OK OK OK ... the weapons shown are the jo (short staff) on the left and the ken (wooden sword) on the right, and they're both good to train with because they help you relax. I've been practicing Tai Chi Chuan for four years now, specifically trying to relax my body through movements, but for the first month or so of working with the ken and jo, I just realized how tense I was when I would practice, and how it hurts technique. I would find myself in these slightly contorted positions, would tire easily, and not be able to hit my mark because I would start from a tense position, push myself through the technique, and end without being completely relaxed, which is all wrong.

On another note, yesterday I spent a good five hours trying to figure out how to pay my taxes from here in Japan, and I was not relaxed. I had been giving a packet outlining every document I needed and every step needed to complete the process, and yet I spent the whole time sighing with great exhaustion and cringing my fingers and toes. Given, very few can happily do their taxes, but I can honestly say that taxes and such paperwork are the bane of my existence, and the simplest of paperwork can make my brain scream for a swift end. Now, looking back at the process, (though it's not finished yet) I could have done the same amount of work in about one hour instead of five, and without a huge headache if I had just relaxed, and taken it one step at a time. I honestly felt like I was going to explode afterward if I had not escaped to an empty classroom to go through the Tai Chi Chuan form, which may be a testament to its ability to diffuse stress.

Why do I hate doing paperwork and taxes so much? Why do I start my weapons practice completely locked up?

I don't know, but I know that relaxing is good. It makes for better technique in your Aikido, and also makes you less likely to have an ulcer while doing things you don't like.
Posted by Zacky Chan at 8:49 PM