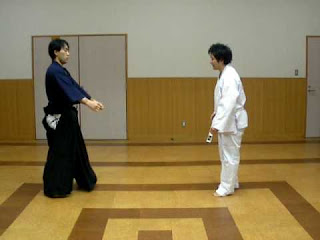 I started training in Aikido here in Kurobe, Japan on January 13th, and have just completed my first test: nanakyu. Officially, the results of the test will be revealed on the next class after further consideration, but the older belts seemed confident I passed and did well; however, I could have misinterpreted everything as is often the case in Japanese ha! The curriculum for the test was fairly simple; four wazas from wrist grabs that were kokyu nage, shiho nage, irimi nage, and ikkyo. I have been focusing on these ever since I started in January, so I think my level of ability is certainly appropriate for the nanakyu test. However, the most important basics are found in these seemingly simple moves, and if you can master them, the rest could be fairly simple. This honing of basics for mastery is something I'm realizing more and more all the time, but of course I still yearn for super-advanced-ultimate-secret-technique sometimes.

The test was fairly short. I consisted of some preliminary traditional etiquette of bowing at all the right times and people, and then displaying the techniques before sensei on the classes high ranking blackbelts. When I started, I semi-intentially hadn't put a lot of importance on rising through the ranks with tests and belts, and was rather content to just absorb as much as I can each class ... but that hakama all the black belts wear looks more and more inticing every single class, especially when I look in the mirror and see my white belt. I wonder what other martial artists think, but after earning a black belt, seeing that white is just so ... WHITE!

Well, onward and upward.
Posted by Zacky Chan at 2:51 PM