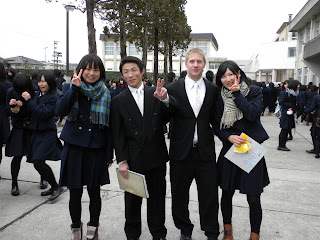 Yatta! They did it! Congratulations to the Sannensei of Sakurai High School on their graduation this year. For graduation, aren't the students supposed to be the ones who dress up? This is just one of the many differences between a high school graduation in the US and in Japan. Before I get into that, here's a picture of two girls who graduated, one of the PE teachers of Sakurai High School, who is a world class wrestler who has competed in various cities in the US, Sweden, Norway, China, Mongolia, Uzbekistan, and probably many other places I have forgotten and is one of the teachers I end up talking to the most because he's an awesome guy, and then of course me. 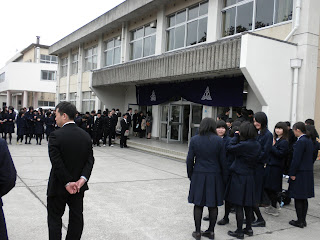 This is after graduation, and the whole school waits outside of the main entrance to say goodbye to all the graduating students. OK, for some differences between graduation in the US and in Japan. At least at my school in Washington State, our graduation was on a Saturday during the middle of the day, and lasted about a couple hours. In Japan, it seems they're usually on weekdays in the morning when school would usually be in session, and only take about one hour. One reason for this is that in the US, each student is usually individually anounced and handed their diploma after shaking hands with a few people, whereas in Japan, each class of about 40 students is awarded their diplomas in one fell swoop of a bow. In the US, a slide show for the students is usually shown during the celebration, but in Japan, these extra parts along with awards, etc are taken care of the day before in a school assembly. In the US, many speeches are given by teachers, principles, members of the community, and various students, whereas in Japan, only the principle and two other graduating students make speeches. One interesting note in the speeches is that in the US, these speeches are crafted by the students in their individual style, full of inside jokes and a seemingly mandatory teary moment, but in Japan, the speeches by the students sounded (given I didn't understand all that much of them) more as if they were a bit more prescribed. In the US, graduating students' families will often come from all over the country for this day, which makes for quite a crowded and lively time, whereas in Japan, often times only one parent comes, because the other is at work. Also, as you noticed, the teachers are supposed to dress extremely formally (men wear black suits and white ties), but the students wear their usualy school uniforms, and not special gowns. 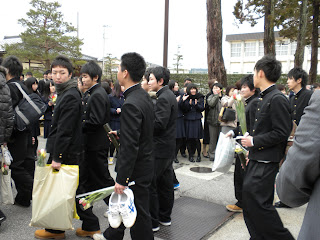 While my description of a Japanese graduation may seem devoid of all the fun celebratory extra stuff that may be apparent in the US, it certainly has its own majesty and import involved. I was moved by the tradition of ceremony that accompanies all such events. Extreme attention to detail, and prescribed expected movements are executed to the 99th percentile, which displays a quiet but powerful sense of respect. You certainly get the impression something very important is happening during these ceremonies. And although it certainly wasn't the most exciting graduation I had been to before, it really only lasted an hour, compared to those of the US I've seen which can drag on for three hours plus (I wonder if I'm exaggerating that). 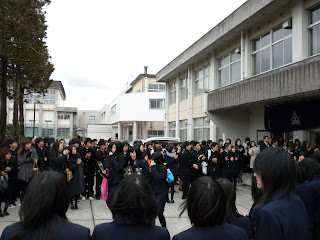 Also, I was surprised by the amount of signing involved in graduation. Everyone, and by everyone I mean everyone in the gym was singing except me, unlike the US where you may have a few enthusiasts, but maybe the majority I feel just mouth it wondering why they have to be doing this. Did my high school in the states even have a school song? 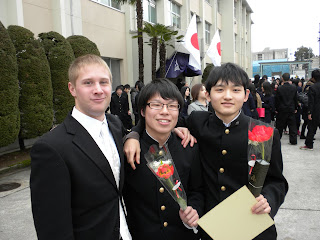 You could easily end up talking to Ichigo or Toshi one day because they are awesome at English and will surely be fluent after a few years at university. 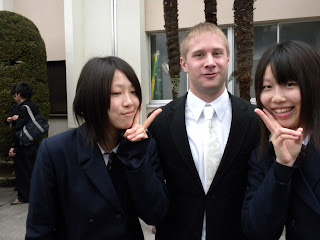 They weren't the best English students, but they're definatley twins. 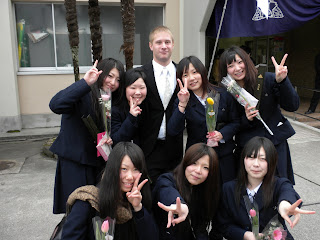 I swear I was heading back to the office to do something important, but one last picture seemed OK. How could I say no? 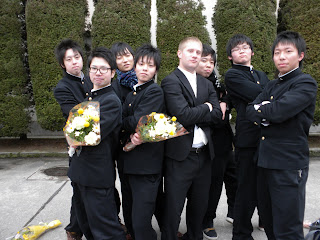 And how could I leave without a bro pic. 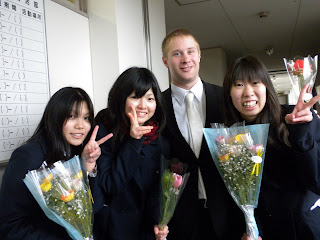 After graduation in the morning, the students are off from school, but all the teachers have to back to the office for work. At first I thought this was a bit anti-climactic, and really boring ... but little did I know it was only the calm before the storm. The teachers had their own dinner party at the fanciest hotel in town, where a room was rented out and various delicious foods and nomihodai (all you can drink) commenced. We had school the next day, so I assumed it would be a casual dinner, and an early night to return home ... but that was silly. After my Aikido party adventure (check past posts) I think I would have learned ... but I honestly thought that dinner would be it.

Unfortunately no pictures were taken, and for all the teachers sake, fortunately their were no pictures taken. I guess it promotes the point of such parties. During 90% of the time, teachers are working at least 10 hours a day with many other responsibilities at school besides class and putting up with all different kinds of shite from all directions, but when they party, they party without inhibition, and was quite a sight for me. Everyone got a lot cooler, quirkier, and more drunk than I had seen them before, and a lot lot lot of singing took place. Also, it seemed the dinner at the hotel was a precursor to about three other bars to be visited.

Japanese graduation. Different, but the same.