Musings on the Five Element Theory and the Martial Arts 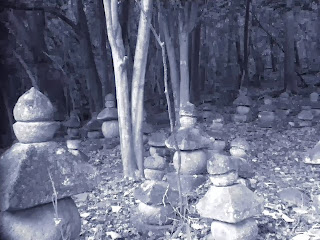 This is with respect to the Japanese five element theory: godai (earth, water, fire, wind, void), and not the Chinese five element theory (earth, wood, fire, metal, water) which is equally interesting, but not what I'm talking about here. I've been fascinated by such element theories since I was a kid. I'm not sure exactly why. Perhaps it has something to do with the creative categorization of the world. Perhaps it's the connection to nature, or the ability to dissect all phenomenon into parts which we can focus upon individually. Anyway, it's something often on my mind and thought I would share some of those abstractions with you here.

There are set specifics in this godai with characteristics of each element (basic info can be found here http://en.wikipedia.org/wiki/Five_elements_(Japanese_philosophy). I'm aware of these, but also let my imagination take hold and change them how I see fit. Maybe there's more than one way to see them. What is written below is pure unedited thought. 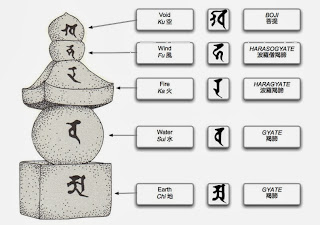 Earth:
Earth is simple, it's the physical world which we touch and feel and interact with. It is the stones and rocks and solid ground, it is also the trees and plants, and it is also the animals and humans. Lessons are immediate and effective: we touch, we feel, we know. It's cause and effect and the basic world all of us operate on together.

I think of karate. We punch and kick and block and move. We use our bodies to learn simple wazas and katas. It is simple empty handed techniques based on practicality. Danger comes, we neutralize and conquer or evade.

Like deer and foxes in the woods, we wake up, eat, live, die. We must survive. This is earth.

Water:
Water is intelligence. We utilize earth to survive and operate in the world because this is necessary. But water is a better way to engage the world, a smarter way. We see water's effortless movement, its purity, its patience and its immortality. We also see it overcome the solid earth. Water is cultivation and refinement. We are the stones that become polished by utilizing water.

I think of aikido and tai chi. By using softness, fluidity, and intelligent anatomical alignments, the muscles are not needed and one can overcome the stronger and faster. It's learning to breath through our movements and overcome somebody without using force generated by excess effort.

Fire:
Fire is fierce and consuming. It doesn't reason or pity, it just burns, and burns everything it can as long as possible. It is the harsh lessons of life that burn us with no regard for our safety. It is that which will overcome us if we do not protect ourselves against it. Even attempting to protect ourself against it we can be defeated. It cares nothing for feelings or abstract justice, it is chaos bent on nothing more than consumption.

I think of blades, like swords and knives. Think of this because of the intent to kill. One does not use a blade unless it's life and death, not unless the intent is to kill. Lessons learned by the sword are sharp and bloody.

It is the world of real violence whether we like it or not.

Wind:
Wind is ... difficult ... I think it is high technique, perhaps otherworldly. High, way high above the realms of humans and trees and animals and mountains is the world of the highways of the wind. It is an ever changing powerful world of wind, and to navigate it requires utilizing all of the phenomenon around at once. Wind is not simply one thing moving pushing through the air, but an ever changing world of displacement. The wind blows in a multitude of directions at different times. For birds, they do not simply flap their wings and fly, but soar and glide and dive. Motionless in the sky, hawks utilize a multitude of different kind of feathers each that react differently to the subtle changes of the wind. At the moment that hawk wants to dive, he but makes small changes and enters the flow of the winds to fall at lightning speed.

I think of archery. In archery we utilize tools to achieve goals normally unattainable by humans: shooting something from a distance. It requires intelligence of design and physics. It's utilization requires a find balance of using our bodies to manipulate the equipment while also getting out of the way as much as possible to let the machine move on its own. In kyudo, we must use our muscles intelligently, in a genius way, to shoot the bow at its full capacity.

Void:
Void is nothing, and yet it is responsible for nothing. It comes after all of the other elements as the most advanced stage, and yet it was there before all of them existed. All of the others were able to exist because of the void's existence, or non-existence. From this void comes the potential of our world. Then all of the phenomenon changes perpetually, and within the sinews of that change is the void, allowing for that change to come to pass. It is the beginning, the end, and the transitions. Because we talk about it, it is. But really, it's nothing at all.

I think of no-martial art. It is us interacting with the world, reacting to different phenomenon before the use of thought. Once thought emerges and is utilized, it is a child of the void. The void is us reacting to someone attacking us or stealing something from us. It is what we experience after un-learning a technique. It is responsible for what we do, and then it is the space afterward allowing for reflection and change. 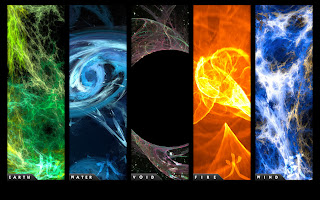 Thank you for reading my ramblings!
Posted by Zacky Chan at 6:49 PM