I Figured Out That I'm Still Afraid of Kyudo 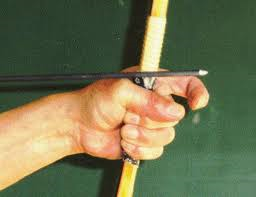 So this is part of a double revelation that happened in the past 24 hours considering my falterings in Kyudo. Total out of the blue flashes of enlightenment light-bulbs, it's moments like these one can see the magic in life and budo.

As I've mentioned a lot lately, I went through a huge phase of injuring my hand a few months ago, got over it, took a break from kyudo, and it's come back, seemingly impossible to fix. There are a LOT of factors to this equation. These details are what make kyudo so difficult, and at the same time so intriguing. I won't go through all of them here, but there is one major ... probably THE major reason why I have been injuring myself, and that is because I'm gripping the bow too hard with my left hand. Our hands are so important in kyudo, they are each delicate minds that communicate with the bow and arrow. Our hands must fit the right shape so as to act as the proper tools to allow superior technique to flow, but they must be as soft as possible so as to get out of the way of that superior technique.

I have been told this numerous times: "Zac, you need to relax your hands more."

This is the difficult truth. Our hands must fit the right shape, and in order to do so at first we will inevitably insert tension into our hands. We must graduate from this as soon as possible. Why I haven't done so initially is a whole 'nother question, but now I see that I am definitely hurting my hand because I'm gripping the bow too hard in my left hand.

This is what I realized while soaking in an onsen yesterday. Submerged up to my nose in steaming sulfur water, this realization blasted me with light and I felt like jumping out of the pool and telling everybody around. (I wonder how many people get these kinds of epiphanies in the hot springs? Like the toilet, I think it's quite the convenient spot for grand realizations.)

I need to keep my thumb straight and extended (that is where my tension should go), I need to keep the connection between my middle finger and thumb through the daisan posture (one reason why I haven't been able to relax my hand), and I should curl my pinky around the bottom of the bow (but I haven't been able to do that well so far, and I don't think it's causing too much problems with my injury). Other than that, my hand needs to be soft, and merely act as a shaft in which the bow turns. There is no other tension I can put in my hand that will help the technique.

I must relax my hand or I will continue to injure myself.

The second realization came today, but I can't remember when exactly. (Maybe when I was eating oyakodon for lunch in a small cafe?) Basically, I realized that I wasn't overcoming this problem due to the fear of further injuring my thumb.

Until now I have made blisters and torn through them, keeping me from practicing kyudo. So I wait for them to heal as calluses and go back, only to tear through them again. Why does this happen? Basically because I won't relax my hand, but more specifically, because I'm afraid of reinjuring my hand. Because of this subconscious fear I focus ALL of my attention on my hand in daisan, which is too much, and do small strange things to avoid it's injury, instead of not worrying and just relaxing my hand. This is not a fear I am fully conscious of which has made it hard to detect.

I've never practiced a martial art which has delt with fear in the way kyudo has. Fear has been directly related to all three painful experiences I've had in kyudo.

First was when the string would slap my arm at the release. This made me afraid of the release and I would flinch just before, making my hanare (release) shit. Next was the string slapping my face during the draw, which made my hikiwake (draw) shit. Now I have the injury of my thumb which makes my daisan (transition after lifting the bow above you and before the draw) shit.

It's so strange that my injuries occur earlier and earlier on in the form. Perhaps I'm getting closer to the core of the technique (as everything stems from the movement earlier). That's really interesting. I wonder if my next injury will happen in uchiokoshi (raising the bow), or in simply just standing there. It sounds silly, but I never would have guessed that kyudo would go like this for me.

Well, just like it was when I got over getting slapped in the face, generally, I'm plain sick of it happening and am going to not let it happen anymore. Specifically, I'm going to relax my hand.

I'm sick of this bullshit, I'm going to get past this and progress in this art. This is the strength of endurance and perserverance in the martial arts, and it's a little different than blind bull-headed wall smashing charging (although it is kind of like that though, I guess).

My hand has healed sufficiently, I've understood why I'm causing an injury, and I'm ready to get past it. Wish me luck.

Pray to the gods, but don't rely on their help.

Tomorrow is a big day on the budo path.
Posted by Zacky Chan at 11:31 PM