Well, at least I had a good view for about a month. 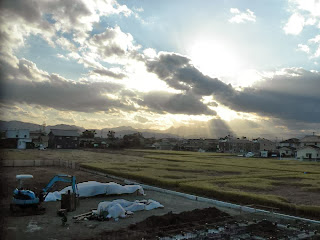 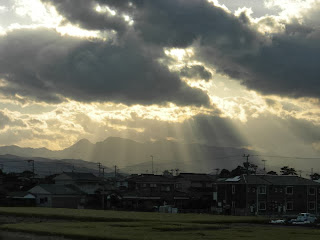 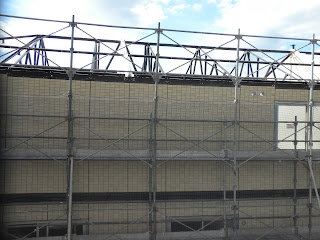 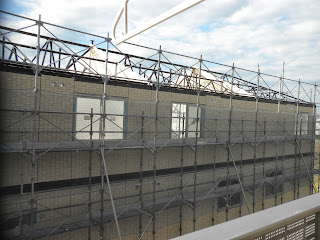 Any hope of staring out the wide windows at the town from afar and the mountains behind for relaxation or inspiration are gone. I'll just buy some interesting curtains and let the electricity bill go up with all the TV watching and internet surfing that will commence.

It wouldn't be so bad if I would've known before hand. Instead, I first woke up to hear the field being cut by weedwackers a week after I moved in. I thought it was interesting and looked forward to someone planting rice there. But then the next day big trucks came and starting tearing up the land. I thought that was strange, and then they started bringing in huge loads of dirt. Then more and more. Then I understood things were about to change in a big way.

I came all the way down here to look at apartments beforehand taking two days off work and paying the $400 for train tickets and a hotel. I cared about getting the right apartment that much. When I got here the real estate agents were super friendly, more than super friendly, so super friendly I thought they really cared about getting me the perfect place. They showed me a lot of places but this one really stood out, and they knew it. We talked about different things. It wasn't the biggest one, or most conveniently placed, but the atmosphere was amazing. Half of that was the layout of the place along with all the right parts, and the other half was the balcony and the view. I knew I talked about how much I loved the view. Satomi might really like the inside, but this place to me was about seeing rice fields and the mountains. I would pay $100 right now just to see the look on the real estate agent's face when I said that looking out the windows of the apartment during the showing. Did he affirm my comment by telling me it was great. Or did he remain dead quiet.

I guess I should have known. A big plus to the place was that it was $500 off the initial key money. I was of course drawn to that, but was already expecting to pay a ridiculous amount for that. I said I understood but they kept bringing it up like it was the once in a lifetime deal. Also, they said that I had better choose quick because someone was definitely going to get it quick if I didn't. Again, they were super nice, too friendly and buddy buddy ... too much.

The place is still great, and I just have to walk outside and in front of the new building for the view, but I'm 99% sure I would've gotten a different place. Thinking of those real estate agents makes something in my heart cringe which is something I so very rarely feel about anything. Whatever, I'll make the best of it, and next time I move I really will move to the middle of the mountains where I can finally get a place without any people around. Don't care if I'm broke, have to get a car, and fix up some old broken down house, as long as I don't have to worry about someone building something right in front of it.

Lessons learned: (1) Check out more places with more than one real estate agency. (2) Make the time you need ... which is more than two days. (3) Don't trust big deals or friendly people. (4) Ask if there's going to be construction done in the next year. (5) Accept that everything you love about something can change.

Anyway, part of this blog was to vent, but I'm also posting it on a thought relating to samurai that came to mind when all of this happened.

This is more a fleeting thought than a doctorate thesis so please excuse the brevity with which I explain it all.

Japan is famous for its warrior class, the samurai. They were a vital part of a Japanese history permeated by civil wars. When the Tokugawa Period began in 1603, Japan entered a long time of relative peace. During this time the samurai were still the warrior class, but began adopting responsibilities other than regularly killing people. In this 200 year period merchants begain gaining more influence as that of the samurai declined. Then with the 1860's came the Meiji Revolution where the samurai class was abolished completely. Those samurai were forced to find new jobs, but many fell into poverty.

These are the general facts, but many have written about as to why exactly the samurai class was unable to make the transition, mainly witht the coming of the Meiji Period, but also during their dwindling influence during the Tokugawa. Many write that money was abhorred by the samurai class as it opposed their beliefs of honor. In a country like Japan, to be born into a life where such belief is ingrained into to you as law of both heaven and earth, and then to have it all dissolve with the signing of a paper, I can imagine what a crippling shock that would be. I'm sure many samurai retained their sense of self-honor and refused to accept the future and need to generate revenue.

But then again, any samurai with half a brain would see the change coming, accept its arrival, and change lifestyles in order to survive.

Along with that, I am no samurai.

But I do live my life by a certain honor code. Call me a neanderthal for following old Confucian principles, but something about the merchant class makes me sick. Call me unintelligent for not understanding some very fundamental rules about economics, but there's got to be something more. I'll never be a real estate agent anyway, but I know I would have never rented this apartment to me if I were in the other shoes. I would have said, "Hey, you know what. If you're really into the view, don't take this place, I'll show you another that will be perfect for you." Can't you be a good salesman while still looking out for your customers' best interests?

Well, I've successfully vented my primal rage, and even linked it to budo. It's really not that big of a deal. I'll move somewhere else again. I still have a cool apartment. And you know what, maybe the real estate agent didn't even know about this. I'll just have to adapt.

But man I really really loved that view.