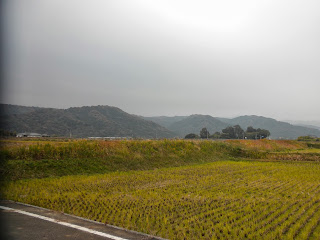 I'm talking about kyudo, but this is evident in other martial arts, and life as a whole.

This is evident everywhere, but it seems to be more distinct in kyudo. Receiving guidance from a teacher is so necessary in certain specific spots and times in kyudo. That line between receiving careful instruction and not is extremely thin. One day a teacher will tell you one small detail, or keep you from making one small habitual mistake and everything will change. Writing this, it is the same in other arts such as aikido, but I find that in open handed arts the line seems wider and more blurred. Of course you can't do the technique perfect in aikido at first, but you can do it to a point of sufficiency. After that, a teacher will continue to tell you these details you probably won't do immediately. You're listening to the teachers' instruction, but at the same time, when you finally are able to do that technique, it is a product of your own body finding the result. Looking back, it's really amazing.

I find kyudo to feel different. I make a mistake and can't see how to fix it. A teacher will explain it to me, but my hands just can't do it immediately, and the result is still horrible. In aikido I could do these things almost immediately, but in kyudo the time is infinitely long, impossibly long. The dissent between what a teacher does and what I do is so vast, the immiediate results so unsatisfying.

Interestingly enough one of the other members in Kyudo was helping me out and told me a couple things that revealed some inspiration. First, he said that it takes about 6 months for the things we're working on now to finally show their effects. That doesn't just mean we practice something today and it magically becomes a reality in six months time. It means that after six months of focused effort, some flowers will begin to bloom ... due to that focus and hard work is the point. Second, he tried to explain tenouchi (the left hand which holds the bow) which is a term used in lots of martial arts, but is mainly concerned with the yunde (left hand) in kyudo. We can watch each other out in the open, even give pointers to each other, but essentially the tenouchi is our own secret to unravel. Everyone's bodies are different, so what works for one will not work for another. Also, a lot of what happens goes on inside of the hand happens where nobody can see. We imitate the shape of our teachers and let our insides form according to our own evolution.

We need instruction to begin and progress, but I'm beginning to think that we learn all of this mostly on our own, and the end result reflects our individual selves. Mr. Parker over at the Mokuren Dojo (http://www.mokurendojo.com/) often talks about this and calls it "Watakushi-do", I'll take the liberty of calling it "the Way of Me".  We are studying these arts that have specific names and ways, but we are really creating our own style. In this I'm not sure that it matters so much what art we study, as long as we do our best to strive for progression, listen to those who have come before, and internalize the world to make it our own.

I met the main sensei for the first time the other day. Being a hanshi (8th dan [8th degree black belt]) he has a bit of fame in the area and is certainly considered the head of the dojo. Until now I've only had one chance to go for night practice, but I went yesterday and finally was able to meet him.

A strange balance of what I expected and an unknown I wish to explore.

Physically, he's pretty much like a normal Japanese dude. He's a few inches shorter than me and not particularly fat or skinny or anything at all. His hands are smaller than I expected. This might be a weird thing to notice, but so much of kyudo has to do with the hands, it's hard not to apply reasons to success or failure in technique to such a physical part. My sensei in Toyama had long fingers, and the way he held the bow seemed so easy for him, where as I have smaller hands and shorter fingers. I know technique depends upon technique itself, not just our physical bodies, but for some reason it was harder to see with him. Now with this sensei in Nakatsu, I can see hands similar to mine reach success, and that gives me hope.

He certainly has a presence, but I have to say "presence" in Japan is largely affected by the surrounding people. Because he is who he is (not just his title, but his vast experience and history with all of the other people, I'm sure) people make way for him and hold him up in a certain way. Aside from that, I perceived the calm strength that usually marks an aged practitioner in budo.

He's super nice, but won't bullshit you. When I first met him, I was nervous and polite (probably two characteristics I've subconsciously been adopting in Japan! Not too much though ... enough to translate my feeling in Japan effectively, I think ...) he saw this, but also saw that I came seeking knowledge and teaching, and I think he understands me pretty well though we haven't had much time together. He was super nice and talked and joked and relaxed with everybody, while also shooting with others in zassha (sitting form), and would give advice freely about people's form.

But like he said, he also won't bullshit. I feel as though when I left Toyama and first came to Nakatsu my technique was as good as it could be, and something I'm not ashamed to show. But after a month of not practicing, and then a month of sparse training due to messing with my hand, my technique has crumbled to something I'm embarrassed of, but have to progress on nonetheless. Anyway, so I went and shot and knew he was watching me. I got worse and worse and just went straight up to him and asked him questions about my tenouchi.

This is strange in Japan, I think. For a beginner student who only just met the head sensei to walk straight up to him and ask questions. I think the mark of a good teacher is one who will take the question as if it came from anybody and answer to the best of his ability. A lesser teacher may be offended that you don't respect unsaid rules concerning a certain distance from the teacher until after a long time. I don't know. These are unsaid and unwritten rules sensed by feeling, something I will not be very good at being gaijin. Maybe I violated some kind of faux pa, or maybe it's nothing at all. Anyway, I'm gaijin, so I do have a bit of leeway with such things, because I'm not expected to know, or maybe we do things different from where I'm from ... well, both of those are correct I guess.

Regardless, sensei seemed happy to receive me and went in depth to answer my questions. He explained the basics of what one should do, and how that was different from what I was doing. This is good. How could it be better? But it's also what I've heard before, what I don't quite understand, and what I can't quite do yet.

What I was really happy about though was the attention he gave to the condition of my hand.

What has happened is that I push the bow with part of my thumb instead of the the base of it where it meets my hand, and so a blister developed. The blister didn't heal correctly so it was torn and a cut-like injury appears. I'm doing my best to hold back until it's healed completely again, but this happened in the past and instead of waiting for it to heal, I trained through it and developed scar tissue that has built up underneath the skin. It's relatively harmless and will go away with time if I practice in the proper way. But the issue is, the problem has come back (WHY IN THE LORD'S NAME I DON'T KNOW!) and the wound has reopened.

Anyway, I showed this to Sensei and he recognized it immediately and said lots of other people get this. One surrounding guy came in and showed me he had a callous as well from past mistakes. Sensei had me look at and touch his hand which had absolutley zero marks. No one needs a callous there, and if you're doing the technique right you won't have one.

From there he felt my hand and squeezed the skin as if searching for that built up scar tissue. It's as if he could see exactly everything that had happened and went straight to the source. In the past I've had discussions with this problem with my sensei in Toyama, but never got any good answers I felt. The fact that this sensei felt my hand for the scar tissue makes me feel at ease, as if he knows just what I'm going through, and whether I should continue or rest.

That's the real question. I have the image of perfect technique in my mind, but I can't do it. When my hand hurts, I certainly can't do it, but how should I progress? Should I wait a long time until it is completely healed? Train through it regardless? Wait a bit of time and accept it won't be perfect right away while progressing slowly?

These are the answers I must give myself.

In this light, it's a dark world where only I can hold the torch.

I'm impressed with sensei and will go as often as possible to night training to meet with him as well as all the other extremely talented archers.

But what to do with the mornings. Of course I will go to kyudo ... but my angst is so persistent ... should I inquire about the iaido and jodo???

Life is a mystery we unravel with our actions. Nobody knows what will happen. All we can do is quiet ourselves to better see that path which lies before us.

The weakest part in the grass.
Posted by Zacky Chan at 1:03 PM