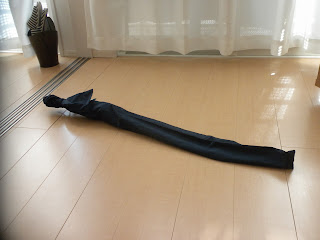 I got a fricken sword! 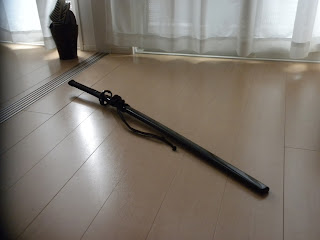 And I'm super happy about it. 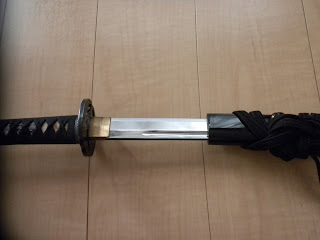 Because it's very cool, I'm learning how to use it, and now I can practice anytime I want.

But I'll need to get some kind of shoulder strap. Walking around Japan with a sword is definitely illegal. I can keep it in the bag shown in the first picture, but I need some kind of strap to hang it around my shoulder when I ride my bike to the dojo. That will make it comfortable and look less like a sword. Today after I left the dojo with the sword I wanted to get straight home with it, but unfortunately I had a lot of things to do on the way: get lunch, go to city hall, and go grocery shopping. The whole time I was trying to hold it in a way that made it not look like a sword, but I probably just brought more attention to myself. I wonder if anyone noticed.

So how did I acquire this fancy piece of equipment? From Sensei ... for a price of course: about $300. The dojo has had it for a while but nobody has been using it, so it worked out perfectly. I really don't know anything about sword quality, but I trust my sensei has endowed me with a sufficient blade.

I was worried about when I was going to get one because when I initially asked sensei where I could buy a sword he said the internet would be the easiest way (not many swordsmiths in the area). After that though, I ran into the other sensei (who I think is the head of the dojo) and he said he would see if there's anything he could find. I guess this was it. I had a feeling they might have something for me, so I brought the cash, and it all worked out perfect.

Now I have my own sword! I'm very excited about this.

And the practice as well.

Today was my second day and the time just flew by. An hour and a half just disappeared as I focused on working the movements of the sword with sensei and the other student. We start class by practicing swinging with a bokken and then after a few minutes go to the real blade. We start by swinging straight up and down from a neutral stance facing forward. Then we start swinging with a step. Today he showed us about diagonal cuts. Then we move into drawing the sword and going through the motions which must be the first kata or waza or something. From a standing position you draw, make a horizontal cut, then step forward with a vertical strike, then step back and sheathe the blade. After that we practiced the traditional bowing out with the sword, which may take me a couple practices to get. Then he showed us how to tie the knot of our string on the sword, which I'm fighting against just completely giving up. I don't know what it is about my brain, but I have serious issues with knots. I used to work in the tree service and making knots was a big part of the job, but one I could never get down. I guess this is my chance to get it right. That's what budo is about. None of us are going to get it right immediately, but all of us can learn.

So yeah, practice is super exciting and I'm really enjoying the teacher and other student, especially now that I have my own sword. Any good budo practice will have ups and downs, easy parts and hard parts ... but right now it's all effortless smiling fun. I'm interested to see how it goes.

Do we really need to struggle with our art? I mean, what's so bad about it being fun? Is it possible for one to practice a budo by simply floating straight up the mountain without falling into the valleys? That's an interesting thought, I'll give it a try.

I'm going to go over a few details of what we learned. I hope to do this after every practice so that I can process what I've learned, teach you about what I'm doing, and maybe hear back from you guys if you do it a different way. These things are learned on the second day and probably going to seem very simple, but that's because it's just the beginning. I'm sure there are lots of ways to do the same thing, and better ways as well, but this is where I am.

1.) When swinging the sword you need to loosen and flick your wrist for two reasons.

First, it's to relax your body and use forces other than just your muscle strength, making the strike more effective.

2.) You only need to cut with the end of the blade enough to slice, and when you do, you draw/pull the blade across the surface ... this is opposed to hacking through something. I was aware of this from the aikido sword work, but it's a super important thing to know.

3.) There's only one angle you cut at when it's not vertical or horizontal. All cuts, be it to the head, shoulder, waist, arm, leg ... they all follow one single line, so becoming familiar with that line is super important. We practiced doing this cut by aiming at an invisible opponents head and going diagonally through it, both from the left and the right.

4.) All cuts with the sword follow straight lines. Any deviations will reduce its effect.

It's hard to see in the picture below, but the blade is facing up, with the dull side on the bottom completely resting on the saya, this is how it should be when you draw. 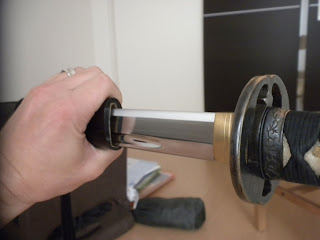 This was big for me because I thought that you drew the sword straight into a swing. Perhaps that's what it's like for the masters, but if I try that I would completely cut up the inside of the saya and have a weak swing. What we are really doing is drawing the sword out of the saya, and then cutting.

There are certainly a lot of other things going on, but these are the main points I'm focusing on right now.

Sensei is really funny. He's a very cheerful big smiling chit chatty kind of guy when you first walk in the dojo, but you can also see him switch into his serious budo mode. When he teaches us, he acts very much like a teacher, treating us as equals, explaining things, and helping us to achieve results, and sometimes making jokes to lighten the atmosphere. I can't tell how good he is at iaido, but I can tell he's a great teacher. We flowed continuously through the entire practice though it was made up of many different parts. Part way through I thought, "Wow, he transitioned through that perfectly!" I wish I could do that in my English classes.

It's funny when I think of my other senseis in aikido and kyudo ... and they're all very different.

I think my aikido sensei was the least teacher-like. 90% of our practice was physically doing the technique, and that's mainly how he taught us. He taught by doing, and for aikido I suppose that is most important. Certainly he would explain things the best he could, and tell us when we did something wrong, but a lot of times he would tell people they were doing something wrong but couldn't quite tell them how to do it right. Perhaps that's just part of aikido. But I also know he wasn't the most "teacher-like" of teachers.

My kyudo sensei in Toyama was an excellent teacher, but different than my iaido one now. He was a bit more authoritative/strict, like he would tell us to fix something, we'd do it wrong, and he wouldn't be satisfied until we did it right. But of course he try different methods to explain these things to us. But in kyudo you're essentially doing the movements all on your own, and doing things that viewers can't see easily, so it makes for a difficult time learning sometimes, I think.

Anyway, time to get swinging!
Posted by Zacky Chan at 3:18 PM