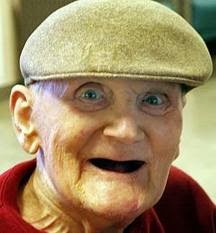 (I have no idea who this man is.)
Today I met a 90 year old man who practices kyudo.

When he first came in, I could tell he was pretty old, but was lively and cheerful. He started chatting to me in English, and I was surprised at his ability. He was better than most younger Japanese people and could keep a conversation going. He said he was 90 years old and still doing kyudo ... 90 YEARS OLD AND DOING KYUDO!!! Kyudo is no soft art, and pulling a bow at that age standing up straight and straining your muscles and will is no small feat ... for anybody. That surprised me, and he walked away for a minute, and came back with some small Japanese treats for me. (I think every aged person in Japan is always carrying around sweets to hand out to foreigners, because this happens most everytime! Maybe it's a habit I'll start soon.)

So we chatted more, he left, and then came back again with a postcard with him on it and a printout in Japanese that looked like it was from a newspaper and gave it to me. He said it was from about 20 years ago when he was 70, and he looked super strong and healthy ... at 70! At that time I was in elementary school trying to hide picking my nose from other kids on the school bus. He said he was in the coastguard and liked building radios. At that time I was changing ready to head out for work so I didn't see him shoot unfortunately.

After that I went home for a minute and showed the postcard and printout to Satomi and she was super impressed. Curious as to what she found out I started reading the printout on my own.

He started kyudo when he was in middle school, which means he started kyudo about 75 years ago (though he said he's been practicing for 60 years, which probably means he took time off when he was working, not sure). That's unbelievable to me. I can't possibly imagine doing anything for that long. I suppose if I'm lucky enough, I can say that I've practiced kyudo for 60 years one day.

But then, the part that really impressed me was that he pulled a 37 kilogram bow in his prime.

If you don't practice kyudo then that probably doesn't have much context, but the strongest bow I've pulled is 17, but now I'm using a 15 (I think). A lot of perfectly skilled teachers use 20 kilogram bows. Using a 25 km bow is considered really strong. I've never met someone who could pull a 30kg bow, and now I just met this dude who used to pull a 37 kg bow. That's crazy. Apparently he's been dropping the weight as he's gotten older, but I think he pulls a 20 kg bow now at 90, which is impossible for me now at 28.

The numbers are just too much for me, I'm dumbfounded and impressed. In a way I feel like continuing is pointless because I'll probably never be able to pull a 37 kg bow like him, but then I'm also motivated because the only important thing is continuing with a genuine effort. Without that there is nothing. With that, you can do anything ... including doing kyudo for 60 years and pulling a strong bow.

My kyudo practice has resumed after a hiatus during the winter break, and my ability is pretty weak, but it is what it is, and that's perfectly fine. I'm working on humbly going when I do, enjoying it, while focusing on two specific aspects:

1.) Pulling the bow with my back, which means maintaining the stretching tension in my back and backs of my arms from the beginning to the end. When I do this things work out very well and I do great kyudo ... when I don't, it's because I'm afraid of the string slapping my face, and I break the connection somewhere ... I think in uchiokoshi when I raise the bow.

2.) Building a good tenouchi (hand posture that holds the bow in the left hand). I need to keep my and in a vertical position, and relax all of the parts that aren't necessary especially my middle and ring finger. When I do this, my kyudo is great. When I don't, it's because I'm gripping the bow too hard, and don't hold my hand vertical due to the break in tension during uchiokoshi (raising the bow). Also, I need to grip the bow better with my pinky, which locks the hand in the vertical position.

When I started, I couldn't do anything at all, but after about 5 pulls I had about 3 or 4 good shots on the makiwara, then went to the target while doing zassha (sitting ceremonial shooting) shooting two arrows and did great. My first shot was a little in front of the target, and the second hit. I was shocked and elated at the feelings I felt through the shooting. Went back to the makiwara and had about 2 good shots, then it all started unraveling and my technique deteriorated.

It's a very strange phenomenon in kyudo, and I'm not sure if it happens to everybody, but always with me. I start out well and progressively get worse throughout the day.

I think this is due to two things:

1.) Thinking too much about the specifics while forgetting about the big picture.

2.) My hand/shoulders getting tired and slacking or tensing in the wrong places.

But it's all good. I practice my best, watch myself silently, and do my best to improve for the next time.

Iaido practice is going well. I'm finding time here and there throughout the day to practice, and I think it's great. By doing it in this way, I'll really want to practice, pick up the sword and go for ten minutes, then stop and continue my day until an hour or so later I get the urge again. Each piece is very small, but each drop is pure quality curiousity and effort and all the small pieces add up to a picture much bigger in the end. I'm taking it very slowly in these early stages, we'll see how it goes.

Hope you are all starting afresh in this new year, cause it's a great time to begin.
Posted by Zacky Chan at 11:55 AM