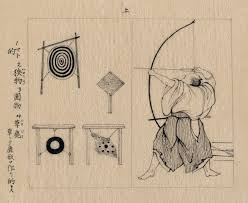 Tonight was another classic case of having the chance to go to night kyudo, almost opting out in order to relax at home, but going and having an excellent session. It was a day off and I spent the day with the wife out exploring our new home of Nakatsu. It was raining and I thought about just relaxing and cleaning at home, but ended up going to practice anyway and it was definitely worth it. It's funny no matter how long you practice martial arts, this tendency to opt out of practice still remains strong. I guess I recognize it when it happens better, "Ah, I feel like not going, but I know if I don't I'll regret it." It takes us back to rule number one of practicing a martial art:

Anyway, I went around 6 o'clock, just before most everyone shows up and the first person I see is the head 8dan (hanshi [8 degree black belt]). I perked up right away as we greeted each other. I knew right away it was worth it to come. Such a high ranking and highly skilled kyudoka is rare and to watch him practice, and have him watch you and comment is a very special opportunity. Getting changed I was aware of him the whole time, and knew he was aware of me. It's kind of like how I feel around the other head sensei in iaido. I feel like they're always critically watching, and so I'm especially sure to be on my best behavior, not without a little healthy anxiety.

When I first told my kyudo sensei in Toyama I was moving to Nakatsu, the first thing he did was grab the official book of kyudo dojos and looked up Nakatsu. When he found that Nakatsu had a hanshi sensei, his eyes widened and he said, "When you go to Nakatsu, go there immediately and start training with him." He also said I should do my best to be on good relations with him and talk to him as much as I can, and that was also the first thing I thought of. This is only the second time I've seen him at training because I can so rarely go at night when he shows up. But like I said, just having him there put me on my toes and made me excited about training.

Anyway, going back to anxiety ... I think it's really helpful in kyudo to have. When I first started, I was shocked at the amount of times that you shoot while other people watch you. At first it's like, "Please don't watch me, it makes me nervous," but I learned quickly you can't say that, and it's just a natural part of the art. We learn from watching and being watched by others. One of the most important things about kyudo is learning to get used to people watching you shoot alone. It feels like someone watching you when you're naked. You probably don't like it at first, but in kyudo it's something you have to get used to, and it will make you a lot better. This is also why it's important to participate in tournaments and tests. It's about doing your best and shooting as you are, even when everyone is watching you, especially under the pressure of competitions and exams.

I used to hate this nervousness and fight against it, trying to relax and eat away at the nervousness so shooting alone and shooting in front of others became the same, but I don't think so anymore. In fact, that nervousness I think makes you a better archer.

I'm not sure about how to explain it in a way that is honest to the feeling. Because it's mostly just a feeling. I feel nervous, and when I do, I shoot better. I miraculously do a lot of the things I've been trying to do subconsciously and for some reason snap into some ideal budo mode where I do my noble best without caring too much about hitting the target. It's when I'm left alone and without any pressure at all that it all falls away.

So the head sensei was there watching, I was nervous, shot a lot, and did fairly well. I was ever conscious of him, waiting for a chance to talk to him. Just to run up to him and bombard with questions or ask him to watch you seems a bit much. Everyone wants his help and attention. To single yourself out and just approach him like he's another archer seems to go against some unsaid rules of protocol. But then again, he is just another archer, and if I have a question I shouldn't hesitate to ask him. I shot a lot, felt pretty good, and right when I was going to go and sit next to him and initiate some conversation I got distracted by other archers who started talking to me. We talked for about 15 minutes and then I walked over to where I thought sensei was, to find him gone. I looked around for him, but apparently he had already sneaked out and gone home when I wasn't aware.

So I'll just have to wait until next time. But no one here is in a hurry, so it's all good.

I finally feel like I'm in a good place now in kyudo. My hand is completely healed and I'm doing my best not to instigate a reinjury, which shouldn't be a big problem. In fact, it helps me focus on proper technique. I've also been going consistently lately, maybe 3 times a week (I hope to make it 4 or 5 on the average) and so I've found a consistent rythm where I'm not embarrassingly bad. I've been around long enough that I recognize most people in the dojo and am not just "the new guy", and have developed friendships with others around. This is probably the most important part of practice, getting along with others. Once you establish that, everything becomes the best it can be. After that, I think at the one of the deepest levels, the greatest part about kyudo is the relationships with others that you make. Definitely.

I've said it before, and will say it many more times in the future, if it weren't for all the incredibly genuinely nice people in kyudo, I would have quit so many times a long time ago.

But anyway, specifically about technique, my two main issues are ones that have been around for a long time:

First, the string pre-releasing. It only happened once today, and I noticed it within the glove before it could slap me. In fact, it happened just before people were about to pull the arrows out of the targets and I was the last one shooting all by myself. I noticed that the arrow had slipped out but still in my grasp. I returned to the starting position, everyone looked at me strangely and I said that it slipped out, and then I told the people to take the arrows so they didn't have to wait for me. The other people around said, "No no no, wait, he's going to do this next one!" And told me to go ahead and do it again.

Goddamn. It's very unnerving to have that happen, and to have everybody watching and waiting while I try again is a special kind of hell. I realized the best thing to do was just bear up and do my best and try again, which I did, and I hit the target to my great surprise.

That was a little lesson in kyudo. We must face our fears and shoot in the face of potential failure and humiliation. Sometimes we will fail embarrassingly in front of everyone, but sometimes we will succeed.

So anyway, I said a long time ago that I realized this problem wasn't just in the kai (draw of the bow) where the string slips out, but in dai san (a transitional period where you change positions with the bow over your head), but then thought that maybe I'll realize it starts much sooner like in uchiokoshi (where you raise the bow). Recently I realize it's earlier than that at the very first moment you grip the string and arrow (torikake). Crazy, but I'm happy I've traced the problem back to here. I had a senior student show me how to do it right, and I did it with great success. But I've forgotten exactly how it goes, and am searching to find it on my own, to some success. This is another thing in kyudo. Learning how to fix something, doing it right, then completely forgetting. It's incredibly humiliating and embarrassing for your self and spirit, but we must accept these facts and humbly move forward doing our best. Failure upon success upon failure, we keep folding over this experience until one day we can just do it.

After that, there's my tenouchi (hand that holds the bow). I have certain bad tendencies I've had from the beginning but haven't fixed completely yet. I had a senior student help me out a lot tonight, telling me things I've heard maybe a hundred times before. I know this so well, but for some reason my hand won't do it. I am grateful for his help and don't regard it with frustration, but consider it helpful advice that will definitely contribute to my future success.

But then again there is no future,

and if something isn't a success now,

it's because I won't let it.

The beautiful humble path of an archer. I've never experienced a budo like this.

I can't wait to go back tomorrow morning.
Posted by Zacky Chan at 10:26 AM