Why Hit the Target? 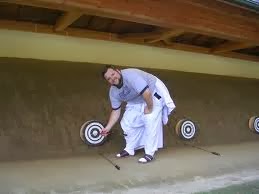 This is by far the best reason ever to hit the target in kyudo.

Hitting the target does not mean you're:

-or even that good.

It also doesn't necessarily make you all that cool, but if you want to hit the target because it's cool, I think you're on the right track.

In kyudo we're doing a lot more than just trying to hit the target, so accomplishing that goal is only just a small part of the whole practice. Hitting the target isn't bad, in fact it's great. It's just that it's not the only thing we're doing in kyudo, so focusing only on that will make you ignore all of the other aspects and then what you're doing is not really kyudo, but just shooting an arrow at a target. Just shooting an arrow at a target is also not a bad thing, it's just not all we're doing in kyudo.

Technically, we do things with the body to create results that lead to better shooting which allow us to shoot the arrow straight to the target, increasing our ability of hitting the target. The techniques are difficult enough to take a long time to cultivate, so we must work on them often and consistently. The techniques are so many we cannot possibly think of them all at the same time consciously and do them effectively. A teacher cannot just say, "OK, do this and this and this and this, and that is all the technique of kyudo and you'll hit the target." The mind cannot possibly think of all these things at the same time. Can the mind even successfully think of two things at the same time?! We practice little by little and eventually we'll hit the target more and more without even trying, though we're also putting all of our effort into the practice.

Through our great effort, we hit the target effortlessly.

But then that's only technique for hitting the target, which is still such a small part of the practice of kyudo.

After that there's etiquette: relating to other people, the equipment, and yourself.

As a culmination of all the different facets there is the soul practicing that we so often hear of with kyudo. Kyudo is not just shooting an arrow at a target, but an entire realm of life.

It's kind of like studying the world. We can take a class, look at a map and some pictures, and read descriptions of places. In doing that we can create images and meanings to places. I think people (me included!) do this with kyudo. I remember meeting a young guy who practiced kendo and aikido and when he heard that I practiced kyudo he said, "Oh kyudo's about the ritual, right?" Well, that's a part of it, but there's also actually hitting the target, I thought. But now in this writing I'm trying to convey that kyudo is not just hitting the target. When we talk about kyudo, we are talking about ideas, and we can use those ideas to balance out our over-emphasized impressions. We use words and ideas to balance our training though they are not completely accurate.

So you can study the entire world, even visit lots of different countries and say that you know the world, but until you've completely indulged in one place until you forget about everthing else can you really know,

In kyudo you have practices working only on ceremony where you completely forget about shooting and you think it's stupid because it becomes something that has nothing to do with shooting. Then you practice only shooting and hitting the target for a while until you think that's all there is, and then have to work on something else, like fixing your bow and then you realize how narrow and close-minded just trying to hit the target is. You see others trying their best though not hitting the target, and that is much more beautiful than those focusing only on hitting the target and being satisfied with just that.

We have a lot of other things to worry about. Shooting an arrow into a target is really not so important.

Just do it because it's fun and you think it's cool.
Posted by Zacky Chan at 2:34 PM