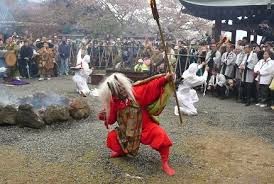 This is an idea I have every once in a while. Most recently, I had this thought on New Year's Day while watching a Japanese traditional dance at a shrine.

New Year's is arguably the biggest holiday in Japan. It is also one of the few times that Japanese people visit shrines en masse, and perhaps the best chance for modern people to reconnect with older Japanese traditions. One of these traditions is seeing/participating in dance.

A common scene at a shrine on New Year's Day is a long line of people waiting to give their prayers at the shrine while a dance goes on on the shrine grounds. The dancers are specially trained and perform in great costume along with musical accompaniment, usually a drum, flute, and bell. These people practice their art, and probably do so because they like it, however it has no immediate monetary value, similar to many of our practice of budo. However, it's not something they just do with each other or in private, it's something they present to the people, it's something they can give to the people. When people watch these dances they have a multitude of experiences depending on the individual. It is a gift of inspiration in a way. I suppose this can happen with budo in demonstrations, but it seems more selfish in budo for some reason. It's more like "Hey look at us and our practice which makes us stronger." instead of "Hey, look at this dance if you like and feel whatever you want to feel."

The particular dance I saw (which is a common theme in traditional Japanese dances) included two people, one acting as a Japanese Shinto priest dressed in traditional garb, and another acting as a demon wearing a bright red mask with large white hair. I'm not sure exactly about the specifics of the dance, but it looks like they are fighting. It seems to be a dance of deep spritual significance, but to show only that deep spiritual side I think is to be selfish in a way and limiting. For those who are interested in the subject of deep spiritual matters this can be incredibly intriguing, but for those who aren't, or who are averted in someway, it can be very alienating and restricted. To counter this feeling, and in attempt to include all of the people around, aspects of comedy and participation are included.

People go to the shrine to pray to the gods for good luck. One could also say participating in the dance is equally beneficial in the eyes of the gods. So, during the dance, the demon goes into the crowd and pulls young children from their parents to dance with them. Usually, this looks like the demon pulling a baby or small child from the parent while the baby is screaming in terror while grasping the parent. The parent laughs, the child is eventually taken, and held by the demon while dancing and being blessed. The child is returned and another is taken until everyone is satiated.

This is something unique to Japan. In America I think this wouldn't be met with much approval. Why would you terrify small children while tearing them from their parents. This can be seen as a very traumatizing experience! It certainly is for most children at first, but many start laughing amid the dance and are happily returned to the parents, or they're completely scared shitless and have a new found love for the safety of their parents when they're returned.

Japan likes scaring it's children. I think it's to make them stronger. I think it's good and funny. But surely not everyone thinks so. I saw a program on TV where they followed some people dressed up as demons around New Years who ran around towns with giant bamboo sticks spanking young boys. Most young boys see this and run, only to get caught and spanked, but everyone understands what's going on and accepts the pain of tradition with a laugh. However, they showed one boy who really didn't want the spanking, but received it regardless. He was crying uncontrollably afterward asking why he needed to be spanked. The demon consoled him telling him it was to make him stronger. I understand the demon and society's perspective, but I'm sure this kid just thinks the demons a big asshole and getting spanked has nothing to do with anything, which I can understand as well.

What I saw on New Year's with the dance was a group of people using Japanese tradition to help, inspire, and include all of the people in society. When I thought of my budo practice, it looks like a very small selfish practice benefitting only myself. Largely what we are doing in budo is exactly that, strengthening ourselves. A big part of this is being able to overcome obstacles with strength and determination. But if all we're doing in budo is working on making ourselves stronger in order to defeat others, I think we're missing the big picture.

I think what we really should be doing in budo is helping ourselves along with everything around us. I think it should be an all inclusive practice with clear merits in society. We can accomplish this by reaching out and working with other people. But how far can we go?

I think at the first step we learn to work with ourselves, as if we are two people. We start a conversation with ourselves in our solo practice, fighting and working together to unite ourselves as one entity progressing on our path.

Next is working with a teacher who we interact with. The teacher gives his/her time unselfishly to help the student improve. The student puts aside him/herself in order to progress according to the teaching of the student. I think this is the first and most necessary stage where we learn to put ourselves in a secondary position to another (while still maintaining our self-preserving strength, but that's another conversation in and of itself.) This is the intimate transmission of life practice through martial arts.

Next is working in a class with others. You have your teacher/student relationship, but then a myriad of other student/student relationships where you work together as a whole. This becomes a small community where everyone benefits each other with their particular personalities and efforts. It is a melting pot where everyone effects others with their own particular presence.

Next is branching out to those who are not directly involved in the art, and I'm not exactly sure how that goes, but maybe we can brainstorm here a bit.

It could be demonstrations to the public. In doing this one can share the beauty and inspiration of the art with others. Some may be influenced to begin a practice, but to focus only on that becomes a form of proselytizing, which is definitely not in-line with the core of budo, I think. Such demonstrations could be less about promoting the art, and rather revealing it like an art exhibition in a park or museum, whose only purpose is to inspire the public.

One could use the specific benefits of an art to help others. But this can be difficult since most arts have become greatly separated from daily use. How can shooting an arrow in kyudo or swinging a sword in iaido be of any direct help to someone who isn't genuinely interested in the art? (Interesting how I've found myself in these two seemingly irrelevant arts!)

However, there are some arts that have great immediate benefits to society. Three immediately come to mind:

Second is using martial arts as a physical means to protect people, by that I mean especially police and military. I have no experience in either, and am pretty sure with those two you're dealing with two different things. Perhaps in military training you're learning to physically eliminate opponents in life-threatening situations where serious violent techniques are required. But for the police, one would need to work on techniques to restrain people instead of harm them. For this I think aikido or jujitsu would be of great worth.

Third is using the martial arts for health. All martial arts can help people improve their health, but for those who need serious rehabilitation working on a soft art like Tai Chi Chuan can be of great help. Perhaps this isn't limited to just physical health, but mental health as well. By utilizing the meditative aspects of Tai Chi Chuan, one can certainly bring balance to a turbulent emotional life. Furthermore, instead of a practice focusing on violence and relying upon phsical strength, one is working with movements that massage and strengthen joints, tendons, and fluids ... which seem to often be the most influential parts of our health.

Having a practice that benefits the self is the first foundation of martial arts, but to have only that is a lonely and limiting experience. How can we use our art to help people? I believe by answering question we will reveal the true worth of martial arts while also progressing it's methods in the modern world and future.

I don't want to talk about budo with only other budoka, but people who seem to have no relation to its practices at all. I want to find the underlying principles of daily life that can be translated by movements found in the martial arts. I want budo to be a gift to those who are suffering. Budo is a way, one that climbs a mountain making us strong and wise and giving us inspiration.

Budo is not a stagnant practice of ancient violence, but a way of living that can benefit mankind.
Posted by Zacky Chan at 6:13 PM