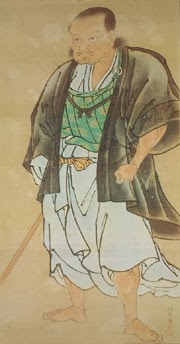 DISCLAIMER: I have only been practicing for about two months, have no other experience in iaido, and have not read much on the art. Also, everything I take in from my class is in Japanese and I don't understand 100% of everything that is said.

You shouldn't believe everything you read anyway.

But to the subject at hand!

I practice Mugai Ryu iaido, one of many different styles in the art of iaido, and I've been anxious to learn what makes it different from other styles.

I've done some research on my own in the internet but haven't found much. Most of the information I got I found on Wikipedia where it talks about the founder of the style, Tsuji Gettan Sukemochi, who was born in 1649. He practiced Yamaguchi-ryu iaido and also studied Zen Buddhism and Classical Chinese Literature. Eventually he created his own style, Mugai, a word taken from a poem that was given to him by his zen teacher (which I have included at the end of this post). Other sources I have read said that Mugai-ryu is influenced greatly by zen philosophy. Like many other budo during the time of relative peace in the Edo Period, budo underwent a lot of transitions from the battlefield to the abstract.

Other than that very small research (please notify me of other sources if you know any on this style!!!) I have what I've been absorbing in the physical practice and talks with my sensei. I'm not sure how much of it overlaps with other styles of iaido, because I don't know anything about other styles, but I'll just mention what my sensei has said is characteristic of Mugai-ryu, which may also be similar to other styles.

Mugai-ryu emphasizes speed, because once you're hit with a blade a cut can be made. Cutting with the blade happens at only a few inches at the end of the blade. Contact with that part of the blade is made, and then pulled to rip open a long cut. There is no idea of cutting all the way through something using bull strength and momentum. We're not focusing on cutting people in half in Mugai-ryu. Mugai-ryu utilizes fast precision cuts to take advantage of distance and timing.

One interesting idea which I think may be very different in other styles is that Mugai-ryu doesn't seek to overtake an opponent with one deadly strike. Many of the wazas I've learned utilize two strikes on one opponent. Often, the first is more of a movement to move faster than the opponent and set him off balance, once that is achieved, the final strike is made.

For example, in one waza we begin sitting in seiza imagining an opponent sitting across from us. Once the opponent starts to move unsheathing the blade, we begin as well. Once the opponent raises the blade above his head for a downward cut, we cut with a diagonal upward slice, but this is not intended to end the opponent there, but more so set him off balance. Once that balance is upset we step forward and strike down on the open opponent. A lot of techniques seem to follow this practice, and sensei says this is characteristic of Mugai-ryu.

To be honest I didn't really like this at first. Idealizing in my head without practice, I would think that you should end an opponent as simply and quickly as possible. Shouldn't you try to do this in one move? Why waste an initial movement that isn't even intended to cut?

I don't have clear answers for this right now, and am left to my own mental meanderings.

One thing our sensei says is that what we are practicing has a long history that is based on real experiences. This style developed this way because of millions of people using the swords over hundreds of years. It was not thought up in isolation and practiced without experimentation. Some of the practices or reasonings may seem strange to us, but then we have 0 experience using a sword to kill someone in battle. With that, you kind of have to trust what your sensei says on this, experience different styles, and judge for yourself.

Another main point sensei is trying to teach us is that the first person who moves or initiates an attack is at a great disadvantage. He tries to explain to us using physical examples and parts of it make sense. This is familiar to me in aikido where most all wazas are in reaction to an incoming attacker (though there are pressing instigating movements like atemi-waza as well). However, something about this seems a bit strange to me, and there's something stuck in my mind similar to Bruce Lee's theory that the best defense is a good offense, that you never defend, and rather press on an opponent to win.

It is on this subject that we begin talking about Katsujinken and Satsujinken. Katsujinken is translated as the life-giving sword. I first read about this from the Edo Period's Yagyu Munenori in his book, "The Life Giving Sword." The implication of this term is that the sword should not be used to kill, but to protect. This is in contrast to the Satsujinken, which is the life-taking sword. Perhaps a Satsujinken style is one that focuses only on successfully killing an opponent with the sword.

The description seems simple, but it's really difficult to differentiate the two isn't it? Of course the sword is used to kill people. In iaido we're learning to swing a sword in order to defeat opponents. If we're not using a sword with the intention of cutting something, then what is the point? Why not do something else? If you're so worried about taking life, why even have a sword?

This conversation seems to come up in my mind and in conversation with others in relation to the martial arts. I think it's popular in the West to practice a martial art with "real" practical ability. What the means exactly I'm not completely sure, but people seem to want to practice the "most effective" martial art which can defeat an opponent as simply and quickly as possible. Though this is said, the image is of violent fast strikes with big muscles. I think of UFC and the idea that it's training the "best" warriors because it pits styles against each other and you're seeing lots of very ferocious young men who probably could kick a lot of people's asses. It's funny that budo also seeks the "most effective" way of doing things by completing an act as simply and quickly as possible, but the image is completely different. But then there isn't one image, because each martial art in budo is completely different.

I could imagine talking to a lot of people who would say, "I want to practice the real iaido, the one that is the best at killing people, not some pussy knock off that idealizes not using the sword at all." Perhaps the discussion doesn't have to have such a violent intent, and one could say that they want to practice the most effective sword style, and with that superior ability, develop an idealogy of not killing others. Maybe that's what Mugai-ryu is?

I've had this discussion in aikido often as well. People ask why practice a martial art that emphasizes evading and moving an opponent around instead of just striking and ending an altercation immediately? There's a lot of different ways to go about this, and the discussions could last for hours, and pages, and lifetimes. It's interesting though that although people accept that martial arts aren't used often and that we should follow peace, but then desire to practice the most vicious violent arts out there. It's like they're just saying, "Oh yeah, we shouldn't hurt each other and the art isn't used in practical life ... but I could kill you in two seconds if I wanted to." I think it's an obsession with power and a fear of loss.

The most interesting about all of this though, is the mental position one takes when adopting a particular style. People like to think they can do one thing and yet think another, for example practice a deadly martial art while advocating peace, but people underestimate the ability of the techniques they seek to imprint on their subconscious.

I first realized this idea when practicing Tai Chi and reflecting on my Karate practice. In Karate we practice wazas that are meant to defeat opponents using strong fast strikes. We practice these wazas until they are ingrained inside of us so deeply that we can react using them without thinking. Well, what happens when someone comes up behind you and taps you on the shoulder and you turn around firing a strike right into their face? What happens when you get in an altercation with a drunk person at a bar and end up using a strike that kills or debilitates them? Maybe they hit their head on the curb and bled to death because you knocked them out cold on the street.

What happens when you meet an opposition and your natural inclination is to "defeat" it?

This is dangerous physically to ourselves and others, and develops an aggressive success-obsessed mindset that is afraid of loss. This is an angry prison world damned for hell. You cannot win. You cannot be happy.

To me, this is the Satsujinken, life-taking sword.

So after class I asked sensei about the characterstic of Mugai-ryu where one doesn't seek to cut someone in one strike, but utilizes a few strikes to knock the opponent off balance and then finish. He said it was particular to Mugai-ryu. I asked if there were other styles that focused on cutting someone immediately with one strike and he said of course there were a lot. He then showed us a couple wazas from the Eishin-ryu. I was surprised to see this, and asked him about it. He's practiced different kinds of iai but he decides to teach and follow Mugai-ryu. I asked him if he like Mugai-ryu better than other styles he's known. At an older and higher ranked teacher with a lot of skill and experience, I would assume that he would choose "the best" style.

These are all just ideas and discussions. We are talking about various scenarios and ideas. This is a big part of iaido I think.

In aikido we are utilizing practical empty-handed movements, but shy away from talking about it too much and just train having the techniques ingrain themselves and naturally effect us.

Kyudo is so disconnected to modern self-defense that we don't even need to talk much about practical application. We just practice the technique in an honest fashion and that's good enough.

But Iai is another strange world where practicality, cutting instead being cut, and life and death is heavily considered, yet actually using a sword in an altercation is as unlikely as finding a dragon. Like the other arts I've practiced in Japan, I'm focusing on the physical technique: reaching out with the tip of the blade and pulling towards me, moving through the movements of the particular waza. But I'm also thinking and talking a lot with sensei about the philosophy. Perhaps more than other arts Iai allows for philosophical meandering.

But then I don't really know. Practice is fun, so I'll keep going and learning.

I here leave you with the poem from which the Mugai name came from:

"There is nothing other than the One True Way
Heaven and Earth profit from this single Virtue
The fluttering feather knows this secret
To be settled during confusion is to be enlightened and pure"
Posted by Zacky Chan at 2:42 PM