Book Review: "Autumn Lightning: The Education of an American Samurai" 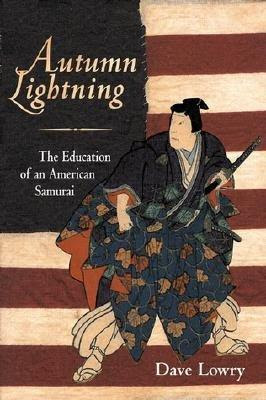 After reading "Bokken: Art of the Japanese Sword," and "Autumn Lightning: The Education of an American Samurai", I have started somewhat of a love-hate relationship with the writings of Dave Lowry. Here, I hope to shine light upon those parts of "Autumn Lightning" that I find so interesting and appalling.

Dave Lowry is an American who first practiced Japanese swordsmanship in his early teens, and eventually moved to Japan to continue his study of the Shinkage ryu. Half of "Autumn Lightning" is stories from his experience learning swordsmanship in his teens from a Japanese family, and the other half is stories from feudal Japan concerning the Shinkage ryu tradition. I enjoyed this particular format, as one is able to get a historical perspective on Japanese swordsmanship, as well as an American in the 20th century learning it's traditions.

I would say that the best part about his writing concerns his stories of the Shinkage ryu in Japanese history. In this book, they happened to focus primarily upon the originator of the style, Kamiizumi Nobutsuna, and the Yagyu family that developed it in its early years, particularly Yagyu Munenoshi and Yagyu Munenori (author of the amazing book, "The Life-Giving Sword").
Mr. Lowry freely adds dialogue to the vague historical facts in order to illustrate the stories better, and I think his artistic license is warranted and is the highlight of "Autumn Lightning."

I was also happy to read his explanations on the emphasis of timing and use of the waist in the Shinkage ryu of Japanese swordsmanship. Furthermore, Mr. Lowry's constant focus on the concept of Zanshin was a great underlying theme to his study. This was best explained through the stories of his Japanese teacher in St. Louis, and of the stories of the Yagyu family.

These qualities aside, I have many issues with Mr. Lowry's writing. Let's take a look at this excerpt here, which at first, explains the allure of the Japanese sword which I wholly sympathize with, but he then goes on to make unwarranted claims lifting the Japanese sword above all other forms of weapons in military history in the world.

"As with other tools crafted to make wars, a cult has grown up around the katana, the long sword of the samurai. Tales are told, as they have been for centuries, of swords that leaped from their scabbards of their own volition to save their owners in times of danger ... Even if these stories and legends are discounted, the lengthy history and intricate lore of the katana give to it a certain air of awesome mystery, heightened by its terrible beauty and the undeniable fact that the sword forged by the Japanese smiths during the feudal age eventually reached a degree of perfection unmatched in any weapon before or since."

What? The "undeniable fact" about the katana's "perfection unmatched in any weapon before or since"? He lists no sources or proof for this bold claim, that could and should offend a swordsmith or practitioner that wields a different blade than the katana. In fact, a great article debunking the mystification of the katana can be found here, http://www.thearma.org/essays/hype.htm. The author points out the practical weaknesses of the katana, and the strengths of blades that were forged in medieval Europe. I understand Mr. Lowry has great appreciation to the katana, but to make claims like this are absolutley unjustified and unprofessional.

Here is another excerpt that should offend martial artists who don't happen to put the Japanese arts on a pedestal to be exalted above all else. Here he is discussing "settsuku", which is body connection, as it relates to the punch of a boxer and a karateka.

"The difference between an attack that has settsuku and one that lacks settsuku can be seen when comparing the punch of a karate expert with that of a boxer's. The boxer is conditioned to use his arms in swinging hooks and jabs, so he punches at weighted bags and does all sorts of excercises to make his arms as muscular as possible. The karateman in contrast, is encouraged to strike from his hips, so he concentrates on developing his whole body to work as a unit. As a result, the boxer's punch stuns - the karateka's shatters and kills."

Judging by this comment, it would seem that Mr. Lowry has never watched a boxing match, read any material about boxing, talked to a boxer, or watched one train. "The boxer is conditioned to use his arms in swinging hooks and jabs", of which the power is generated from the waist and hips! "... so he does all sorts of excercises to make his arms as muscular as possible." All sorts of excercises? Like what? If this was true then boxers would only lift weights, and look more like body builders than the lean and toned fighters they are. And, "the boxer's punch stuns - the karateka's shatters and kills." Oh really? So really in a boxing match, all the fighters are doing is temporarily stunning their opponents with their strikes? And each punch delivered from a karateka has the power to shatter and kill? Technique and specifics aside, I can only imagine this blasphemous section was written intended to give the reader an image of the difference between fighting for sport and fighting for your life, but even so, is that really where your intent should be if you're training in karate? Shattering the bones of your opponent? This is just heinous in every way. Boxing is every bit as technical as other fighting arts, and shouldn't be unjustly disrespected to uphold the mystical quality of Japanese arts.

My next problem stems from a difference in attitude towards proper training in the martial arts. Mr. Lowry made his stance clear in his his book, "Bokken", but elaborates further here in "Autumn Lightning":

"While a throw in judo could be adapted to the practitioner's body or style of attack once he had learned it well, the techniques of bujutsu, as a historically true legacy of the past, had to be preserved precisely as they were taught. As much as possible they had to be practiced as they were centuries ago; to do otherwise would be as unthinkable as sawing the arms off a windsor chair to make it lighter to move about."

This focuses on a good question martial artists practicing traditional styles need to ask themselves: should we make personal changes and innovations to the style, or should we unquestionably adhere to the teachings given? It is clear Mr. Lowry believes the latter. Due to my experience, I would have to prefer the former. In order to practice a traditional art, I believe you need a highly experienced and skilled teacher, who can give reasons and examples for following the art as is, and is very different than just making things up on your own and still calling it a particular style, which I wouldn't agree with. I don't like Mr. Lowry's analogy of the windsor chair, but in fact, I think it illustrates his stance well. It seems Mr. Lowry is training to preserve a style, who's beauty is found in the history and tradition, similar to relics of old that belong in museums. It seems that is where Mr. Lowry's practice and teachings belong, in a museum of sorts at which we can view the past. This however, is not how I would like to experience traditional martial arts. Traditional martial arts are legitimate because they have been practiced for so many years, and because they have been IMPROVED UPON and INNOVATED over all those years. For a style to improve, which is always possible, creative innovation and individuation is needed.

This relates to a comment I had read a while back concerning the Yang style of Tai Chi Chuan. The author wrote something to the effect that the Yang style is Perfect, and any "improvements" are futile, as the masters had included everything in its purest form in the form itself. To me, this is absolutely false. First of all, how do you know that? Secondly, why would you want to simply conform yourself to an "art" where creative contribution is not appreciated?

This becomes quite a tricky subject, that is often at the core of many Japanese opinions on how to practice the martial arts, and at the core of Bushido, the way of the samurai. Mr. Lowry writes, "Being a bugeisha, a pupil of the bugei is not something you ... adapt to your life. It means changing your life, almost in every way, to adapt to the bugei." This quote and philosophy are surely linked to the discussion above, but its elaboration belongs in another post in the future.

Amid the wonderful stories, and atrocious fallacies Mr. Lowry writes in "Autumn Lightning" there is one particularly shiny and glorious gem, where he puts in his own words, the supreme ultimate underlying principle of his style of Shinkage-ryu. This is one of the best explanations of the connection between Zen philosophy and martial arts I have ever read.

"Drawn from sources in Asia so ancient that no one could possibly have traced their roots, the principle was profound, yet of perfect simplicity. According to that principle, if a man's mind is crowded with the ten-thousand incidentals that threaten to hurry their way into our consciousness every moment of life, then inevitably he will find himself concentrating on one or another of them, and at that moment his thoughts - and actions -are stopped. However, if he is able to diffuse his consciousness, allowing every bit of input to pass in without focusing on any, then his mind flows with a constancy and celerity that makes his motions utterly spontaneous; appropriate. Whether he is drinking a cup of tea or cleaving an enemy's head in half with a sword, he will be in accord with the movements of the universe itself. Of course, when a swordsman kept himself so receptive, his mind calmly centered, then he revealed nothing of his mind to an opponent. His strategy was kept hidden, in the shade, so to speak. It was this philosophy that gave the ryu its name and its exponents such awesome reputations as bugeisha."

Only from emptiness, can we see the world as it is, and act with true personal expression. That is art, that is Bushido, that is transcendence for mankind. It is not just swordsmanship, but every single experience we have in this universe.

In conclusion, I believe Mr. Lowry's faults are so only because of a deep love and appreciation for the discipline of Shinkage ryu he has studied. Perhaps he loves his art too much, and thus shuns all else in the world that speaks of martial topics. I share the same fascination with the katana that Mr. Lowry has, and so I can enthusiastically enjoy many of the same stories and concepts that he writes about. But perhaps I will choose not to put my head so deeply in the hole-in-the-ground that is traditional Japanese swordsmanship.

I leave you with a provocative quote Mr. Lowry puts at the beginning of his book from Ronald Tanaka.

"I've been taught to expect a certain precision in human relationships. In aesthetic terms, this means that one can't expect to have both beauty and comfort. I assume you understand."
Posted by Zacky Chan at 9:58 AM