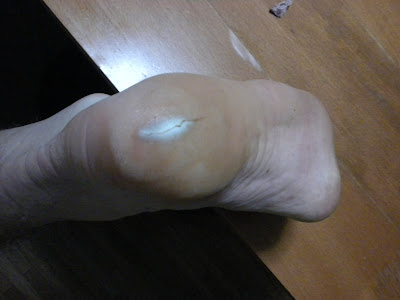 This weekend I went camping in an amazing spot in the mountains of south-western Toyama, but at night when I was stumbling my way through the forest to my tent at night barefoot, I happened to cut both my heels open. The picture is of my right heel, which bears the worst of the two cuts, and the left has almost the exact same cut, but of a lesser degree. I propose that bears are not the most dangerous thing in the Japanese wilderness, but Jameson; or maybe just a gaijin with Jameson.
Anyway, I was wondering if I should go to aikido tonight with the injury, as I had a difficult time walking today, but a chain of decisions were made that brought me to class on time with my feet taped up. My bandages stayed on, and my cuts themselves were not big problems. I found it easy to simply walk on the balls of my feet all day and practice aikido such, which wasn't that bad for a while. In fact, it made me so happy that I didn't hurt the balls of my feet, which seem to be a much more important part of the foot. However, I noticed my hip muscles starting to hurt as it seems they were taking all the strain from doing aikido on the balls of my feet. I couldn't really relax at all during techniques, and couldn't sink my weight. Also, it was by far the most humid of nights for aikido, and while I'm not sure about all the scientific details of sweating so much in humid weather while doing strenuous physical excercise, but I know it makes it damn hard to concentrate. When sensei was demonstrating techniques, I'd be staring at them trying to figure it out, but when it was my time, I had absolutley no idea what was going on.
One of my best friends in class had just crashed his bike last week, and was tending wounds of his own, and certainly everyone in class was feeling the hot summer training. It might sound a bit corny, but that is what training is made of. Maybe its not the most important part, but it is a crucial part to understanding martial arts, and even more so: yourself. I've probably said this a million times while comfortably relaxing and drinking tea or even beer, but I can't stand on my feet, I'm dehydrated, and still sweating beads just sitting in my room as I type right now, and I can say this comment with full enthusiasm. I'm not usually one that would promote training through injury, but I think I made the right decision in playing through this one. I do have the benefit of two days off of aikido though.
Posted by Zacky Chan at 9:43 PM