Dousugi: In Search of Giant Cedars

This is part two of a quest to find Dousugi, giant cedar trees in the mountains near my home. You didn't hear about part one because I never finished the blog post for it; perhaps in documenting these adventures, I cannot recount every exciting detail and thought I experience, but rather highlight some of the main parts. This is part two because part one was a "failure." I went off with my shoddy gaijin maps written from hearsay, made many side trips, got lost, and never made it to my goal of Dousugi. However, what I did find last time, was another gateway to the mountains where I can follow trails and unknown roads to my desire's end. And ... are you ready for this? ... I saw my first wild BEAR!!! After I had reached my limit and turned around giving up on Dousugi that day, I rode my bike about 20 minutes back towards civilization and stopped at a campsite to eat my lunch/dinner. Just after I packed up and saddled up on my mamachari, I looked over towards the woods and saw the big black furry mass that was a bear. It noticed me at the same time, and immediately lumbered into the woods as fast as it could. I got a great look at it for a few seconds, and only about twenty meters away too. 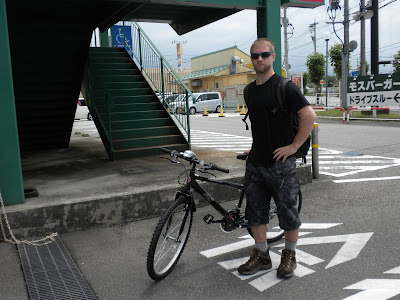 Anyway, this is part two. I was to make no side tangents until I reached my goal. Since my last attempt at Dousugi, I had also made some serious upgrades to mamachari-do. As a matter of fact, mamachari-do has evolved beyond it's name, as one of my upgrades was a new bike; a mountain bike. It's a little sad, and a lot less comical than me on the granny bike, but the new form is appropriate for my missions. With the mamachari, I would just run it to the ground about 1000x faster than I would if I just kept it within the city limits. Also, I bought hiking boots, a quick-dry t-shirt, and waterproof shorts similar to board shorts which are absolutley necessary to keep me from being soaked and stinking the whole time I ride. These were all seriously needed upgrades, and today I felt the benefits. 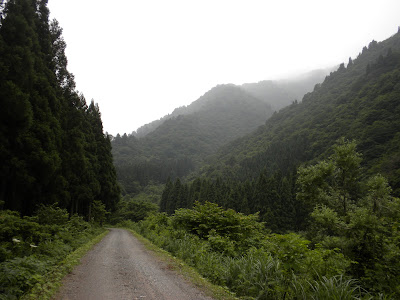 My quest for Dousugi took me to the neighboring town of Uozu, and then along a river into the mountains. The buzz of the highway I usually take to Uozu is a bit off-putting, but once I got on the smaller road to the mountains, the huge trucks and buildings are replaced by infrequent small white farming trucks and expansive rice fields.
I soon reached the campsite (where I saw the bear last time) and stopped to refill on water. One of the attendents of the post was an older man who quickly started a conversation with me. I told him of my escapades two weeks earlier, but then, he took me inside to show me some maps and give me some very valuable information. I had one of those light-bulb moments where things that seemed too large and separate, in fact became very small and perfectly connected. I saw a map that connected a lot of seemingly disparate information, and I basically realized the potential for penetrating the local wilderness. I have goosebumps thinking about it as I type, and curse the infrequency of my weekends to take these trips. Anyway, today was Dousugi, and I was off. 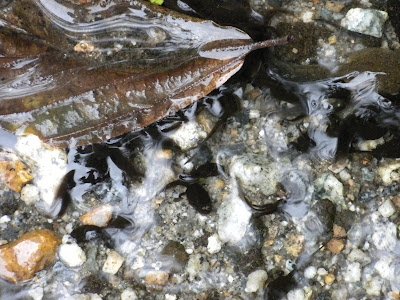 During one of my breaks from riding, I dismounted and noticed a large strange flowing movement going on in a nearby puddle. I looked closer to find hundreds of small tadpoles squirming about. It reminded me of a toddler's t-shirt I had found in the dollar stores here that said "Happy froggies love the rain", and had a cute cartoon frog on it with a big smile in the rain. I tease Jolene often about this, as she's not as fond of the rain as I am, and constantly have my eyes open for larger sizes.

The path to Dousugi takes you off the main paved roadway and on to a gravel road, littered with very large stones that have fallen from the cliff side. If I wasn't biking around these large stones, my eyes were glued to the surrounding forest looking for more bears. However, much of the wilderness in mountainous Japan seems much to steep for a bear. Japan may not have the tallest mountains in the world, but they have got to be some of the steepest. My mind did however, think of areas in the world that have big cats in the forest. I could imagine how easily a gaijin like myself could be pounced upon by say a cougar or a jaguar, and to be in such country, one had better keep an eye out, or have prayed to their guardian spirits. 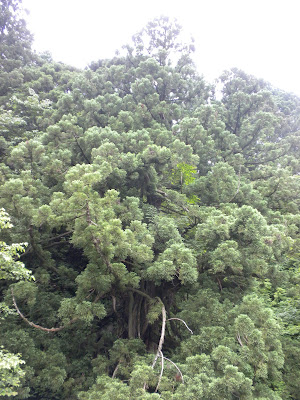 I soon reached the area where I thought the Dousugi (large cedar trees) would be and looked around to admire the forest. At that moment, I saw some very familiar, but very strange foliage from branches that looked like those from a cedar, but much bigger and brighter green. I then realized, I was staring straight at one of these giant cedars. At this point, I realized I hadn't quite made it where my map had told me the Dousugi were, but I was certainly seeing one, and immediately left my bike to search out these cedars on foot in the woods. 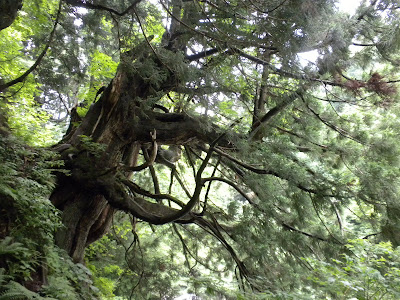 Holy crap, these are strangest and largest cedar trees I have ever seen. Most of them were growing around/atop huge boulders, and were twisting in several directions. 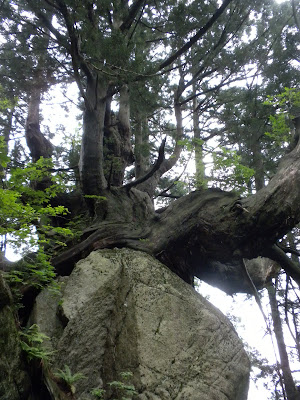 They all had younger newer sprouts that had turned into large cedars of their own from the older base of a single cedar, but sometimes it was hard to tell how large the base was. It was not simply one straight standing tree, but the winding twisting incalculably large base of one that became several at the top. 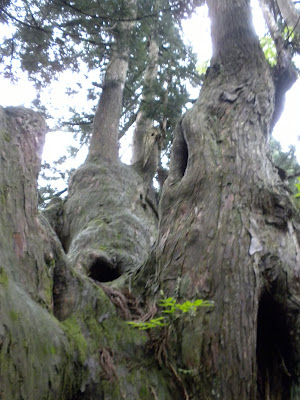 I apologize for my confusing explanation, but I honestly am blown away by these trees, and a bit at a loss for words. 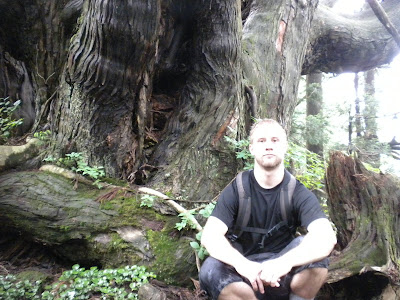 I tried sitting in the crook in the largest one, maybe to close my eyes for ten minutes to feel myself in such an awesome presence. But after 60 seconds, I looked down at my ankles to find a swarm of mosquitos. I thanked the mosquitos for urging me on my way, and on my way I went. 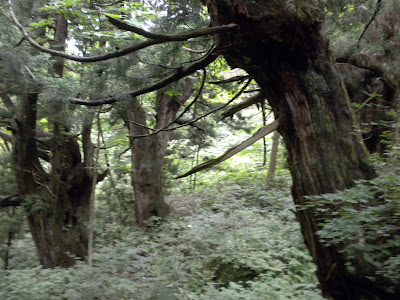 Walking back down to the path, I was amazed to find so many of these giant cedars that dominated this area of the forest. The twenty biggest cedars I had ever seen in my life were all growing together in this grove as gargantuan beings. I wonder how long they have been alive for? Certainly before any samurai or shrine. 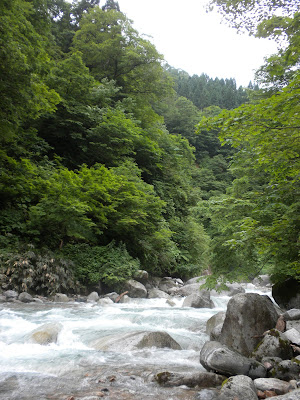 As I mentioned before, the mountains around me were far too steep to climb, so most of my adventure into the mountains was side by side with rivers, which are remarkably numerous and eerily misty. 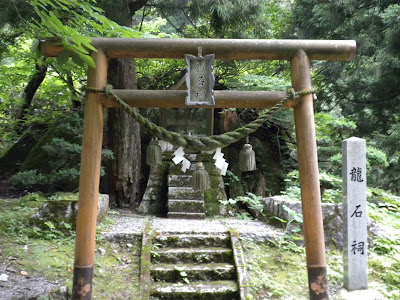 Here is a small shrine, not so much for the giant cedars, as for another strange natural wonder. 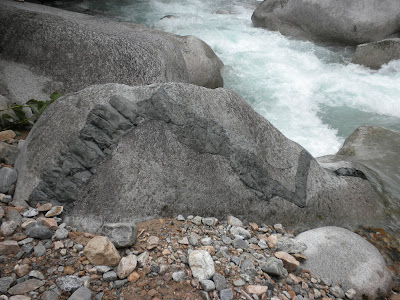 This is a rock whose name, which is roughly translated by Gaijin himself, snake stone. It is famous for the large black stripe running across it, as it resembles a snake or dragon. Pretty cool and strange; two words that I often use to describe Japan. 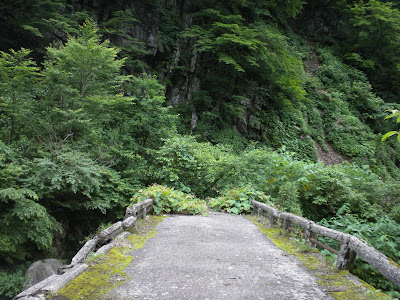 Apparently, I had not yet made it to "The" dousugi, and what I found, I found because of my off-trail vagabonding into the Japanese wilderness. So, onward. Wait, probably not this way, though it looks enticing doesn't it? 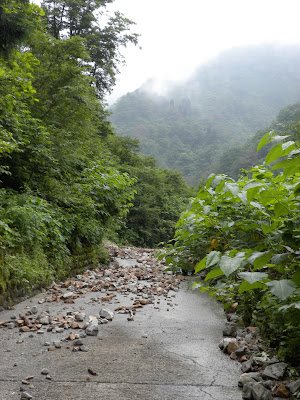 It seems you can usually drive a sturdy car all the way to the base of the Dousugi, but at this time, the road was blocked to cars, as there were too many rocks in the road from a landslide. 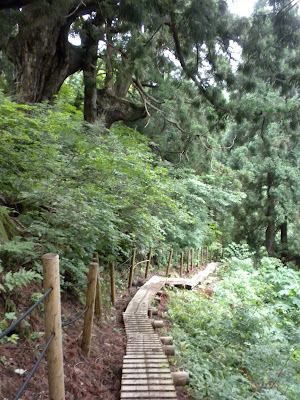 Ah, here we go, on the correct path to Dousugi. 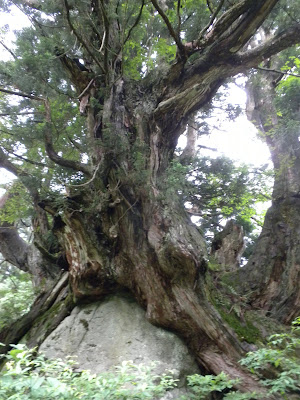 Tadaa! THE Dousugi. Well, this is one you see in the pictures on pamphlets, and the one highlighted on this trail, and certainly amazing ... but I think I found a bigger one earlier on. Mmmmm, not sure, and I guess it's not important, but it makes me thankful for my trailblazing tendencies. 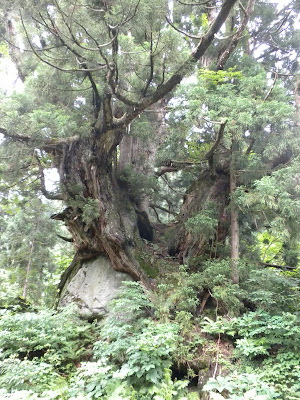 Well, the road goes on, but alas, this is as far as Gaijin will go today. The setting sun and a grumbling belly beg Gaijin to head back to civilization. Sure, time to head home, but not without a sushi dinner and hour at Kintaro onsen. 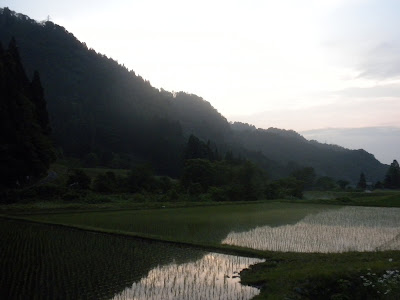 This country provides a curve of experience as steep as it's mountains, and weekly I find new lows as well as new highs. But each substantial high seems to get cooler, and stranger. Regardless of living in a rarely trodden area and possesing relatively low language skills, I am constantly asking more strange questions and pushing the limits of what I can find here; and by kami, they are paying off. The more I push with genuine effort forward, the more this mysterious flower unfolds. 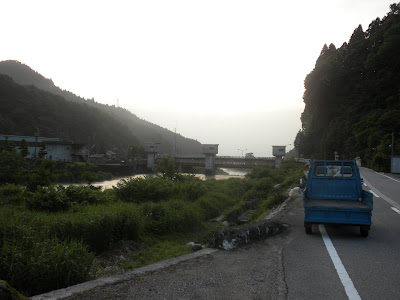 Back to school to grade term final English essays, but also back to my maps to plan Gaijin's next foray into the Japanese wilderness.