Lesson 9: Don't Always Be the First to Leave 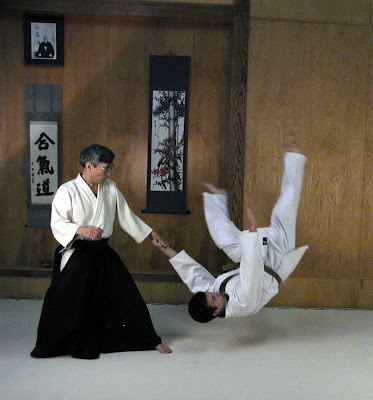 For those that ARE always the first to leave training, this concept may be a shock to you. But for all you others that have stuck around after it seems like nothings going on, then you understand what I mean.

Tonight, Sensei was a bit late, which is unfortunate because we don't get important practice and teaching from him, but sometimes it seems we get a few more reps in and can have fun experimenting when he's not around. It was a really hot night tonight, and the bugs come straight for the flourescent lights in our gym, so it was a sweaty night mopping up the bugs from the mat with our gis (uniforms) and faces.

Anyway, when he did come, I assume he was in a fabulous mood, because he spent the whole time with one of the new white belts who was getting special attention. This is totally fine because I even got that treatment when I first came. As practice ended, we all went to help close the windows and doors. Some people were talking, some were headed straight for their water, but I was the awkward gaijin kind of just looking around dumbly, when sensei came up to me and said "Let's practice some more."

I went straight to the floor to bow and then we got started. He was going extremely fast and hard when he was the tori, so I was flung about and did what probably looked like sloppy uke. And when it was my time to tori, I fumbled was fumbling quite a bit. Now, at this point, you can either slow down completely to get it at your speed, or fly through it to keep the pace. This is an important quandary because if I had slowed down completely I could see sensei's enthusiasm deflate, and hear him say "Oh c'mon just do the fricken technique." And yet on the other hand if I rushed through, I could here him say "You're screwing up the whole technique by going to fast." So, in the split second I had, I decided to go 90% of the direction towards the speedy method, and though it was sloppy, I put my heart into it, and did OK. It's at these times you're essentially naked in front of the sensei to be judged, and I wonder what he thought.

The real gem out of this experience though was that he started teaching me high falls! This is something I've been extremely anxious to start, been waiting for my introduction to it, and actually was specifically thinking of the high fall today. We did quite a few, and by the end I got a few "OK's" and the official OK hand gesture, which is enough to put a huge smile on my face. This was the highlight of my time, and if I had rushed out today, I certainly wouldn't have had the oppurtunity. In fact, I'm sure if it was my habit to rush out, sensei would never think of taking me aside to show me this. Though its usually uneventful, late, and unintelligible Japanese conversation to me, I usually hang around to show respect, try and practice listening to Japanese, and see if anything exciting happens.
Also, tonight when we were leaving outside, I talked with one of the senior students about fireflies in Japan and phospherescents in the States, which was most certainly just as important as all the throws done in the dojo.

For all you white belts out there, I recommend you're not the first to leave.
Posted by Zacky Chan at 9:59 PM