I mentioned it in my last entry about ukemi, but I've been told to ukemi farther again tonight. I got it when I do it with a partner, but when we were warming up doing ukemi (rolls) by ourselves, my sensei pointed out to me that I needed to go farther. I didn't really understand it until he pointed at my lead hand when I put it down before my roll. Tonight I was putting it down at the same level as my front foot which makes my ukemi shoot more straight down, which can be dangerous and doesn't get me very far. Instead, now I'm going to start reaching farther out to make this more effective.
Also, for uke (partner receiving the throws) sensei also pointed out that I was breaking the connection when my wrist gets turned while I'm grabbing his wrist. He kept saying something about power or strength, and so I started flexing or trying to remain stiff during uke, but that was so far off. In fact, this along with the ukemi correction he gave was in Japanese I couldn't understand, and at first, I was left having no idea what he was saying to me, which was incredibly frustrating! Because he says it, I try to correct it, but incorrectly, and then we have to finish the technique with me not understanding and the help he's so eagerly trying to give me is a bit wasted. It wasn't until after class, when I grabbed someone else that could possibly translate, and I found out about these two things. So anyway, about breaking the connection, it's not that I need to flex or make it hard for the tori, but I need to maintain my grip on his wrist. If I don't maintain that grip throughout, the connection is lost, and the tori cannot effectively do the technique.
This is a very important quality to aikido, but one where I start to lose my understanding of practicality with certain techniques. If this was a real attacker, I highly doubt he'll hang on the wrist for so long, especially if I don't even do it in class unknowingly. But, I perceive that things aren't so obvious, direct, or combat effective in the beginning stages of aikido, and so I will proceed on being a good white belt and doing what I'm told, but also supplementing it with a lot of reading and keeping my eyes open.
As for progress, tonight I received my certificate for my first test that I took over a month ago: nanakyu. It had been so long I just assumed you didn't get a certificate until shodan, but look at this! Pretty cool I think. The calligrapher who wrote it even put my name in romaji characters. Onward and upward Gaijin! 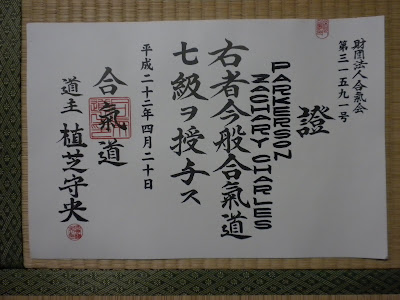