Thoughts On Etiquette in Japanese Culture

You're lucky tonight because they're not just mine, but also those of Inazo Nitobe. Mr. Nitobe was unarguably one of the best writers on Japanese culture, and is most famous for his book, "Bushido: the Soul of Japan." He was born into an old samurai family in 1862 in northern Japan. Though his father and grandfather died early on in Mr. Nitobe's life, he was raised by his mother and uncle, and was always reminded of the honor his heritage was known by. His life would be one of international education and deep study. Universities that Mr. Nitobe studied and taught at were: Sapporo Agricultural School, Tokyo Imperial University, Johns Hopkins University, an agricultural school in Germany, University of Halle, Kyoto Imperial University, and the First National College in Tokyo. This does not include the list of schools where he guest lectured, and does not include the many groups and councils he was part of, or the essays and books that he published.

What we are dealing with here is someone from the highest calibur of education the world could offer in his time, as well as someone from an old samurai family that would greatly effect the morals and philosophies of the worldly thinker. I think Mr. Nitobe's writing is absolutley beautiful and amazingly expressive of both emotion and factual detail. I think everyone concerned with the origins and meanings of martial arts should read his book, "Bushido: the Soul of Japan." However, I'm not sure everyone would enjoy it. The book is written in a scholarly style that is not regularly found in what most consider martial art books. In fact, it's not exactly about the martial arts of budo, but about the connections between the life of budo and the rest of the Japanese, as well as comparisons with other forms of warriorship in the world, especially those of the Occident. In this book, you read more about the social and cultural reasoning of why the samurai lived as they did, and how that affects Japanese culture.

Here I will highlight some of Mr. Nitobe's thoughts that deal with "etiquette" in Japanese culture.

Each country may have it's own factors that culturally shock it's foreign visitors, and I bet most of those gaijin who come to Japan find that it's usually with matters of politeness and courtesy (or maybe just weird pickled vegetables). Perhaps you walked into a room with your shoes when you weren't supposed to. Maybe you took a drink of your beer as soon as it was handed to you by the waitress, but you didn't wait to make your first drink a cheers with everyone else at the table. Or maybe even you answered your phone on a subway. All of these usually are accompanied by a gasp by the Japanese in close proximity as if someone was twisting their spine from the inside of their bodies. Actually a couple of my favorites are not walking on designated paths or sidewalks that wind unneccesarily, or trying to joke with Japanese, which always ends in confusion and some rule of conduct being broken. But anyway, let's hear a little bit from Mr. Nitobe:


"I have heard slighting remarks made by Europeans upon our elaborate discipline of politeness. It has been criticized as absorbing too much of our thought and in so far a folly to observe strict obedience to it. I admit that there may be unnecessary niceties in ceremonious etiquette, but whether it partakes as much of folly as the adherence to ever-changing fashions of the West, is a question not very clear to my mind. Even fashions I do not consider solely as freaks of vanity; on the contrary, I look upon these as a ceaseless search of the human mind for the beautiful."

These "certain slighting remarks" can very often expressed through great frustration. For me that's the length of meetings at school extended much longer due to "unnecessary niceties." For the same reasons, I am also kept from having some meaningful conversations with the Japanese I work with. What do these have to do with a "ceaseless search of the human mind for the beautiful"?


"Much less do I consider elaborate ceremony as altogether trivial; for it denotes the result of long observation as to the most appropriate method of achieving a certain result."

Well, that does seem to be the purpose, or at least a benefit of society.

"If there is anything to do, there is certainly a best way to do it, and the best way is both the most economical and the most graceful."

There is a sentence that should catch the eye of all mindful martial artists. 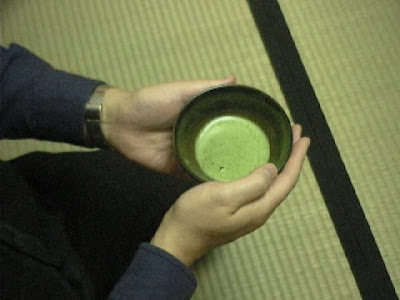 Mr. Nitobe then goes on to explain this theory through Sadou, the way of tea, as seen in Japan's tea ceremony. Japan has many cultural arts that are highly popularized in modern culture, usually of the martial quality, however I doubt many people would choose to sit through a tea ceremony. Tea ceremonies will often last a few hours, and consist of sitting silently with a few other people in a very small tatami mat room. There, conduct and niceties are strictly outlined and obeyed. For all those people enthralled with the idea of "Zen"; who want to buy products that are labeled "Zen", maybe your "Zen" daily planner, your "Zen" tea, your "Zen" t-shirt, or your "Zen" H4 hummer, maybe you should try to experience what is considered "Zen" in the tea ceremony.


"Mr. Spencer defines grace as the most economical manner of motion. The tea-ceremony presents certain definite ways of manipulating a bowl, a spoon, a napkin, etc. To a novice it looks tedious. But one soon discovers that the way prescribed is, after all, the most saving of time and labour; in other words, the most economical use of force,-hence, according to Spencer's dictum, the most graceful."


Here I think we have a wonderful ideal found in Japanese philosophy: beauty through design. This certainly underlines traditional Japanese culture as we have just read about, but is most certainly a driving factor in many modern facets of Japan. I think one of the most interesting (though I personally know so very little about) is architecture. If one travels to Tokyo, you will be able to see the pinnacle of artists striving to create beauty from design in the modern buildings that surround you. That may be one of my favorite things about Tokyo. Though it may not look similar to traditional culture, the modern creations follow the same theory as that in tea ceremony: beauty from design. 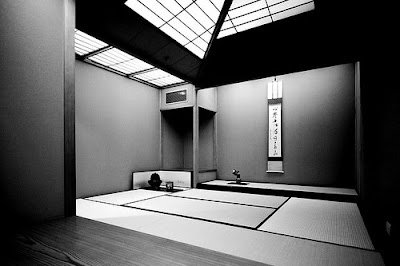 
Mr. Nitobe then proceeds to discuss about how this physical economy of motion relates to one's spiritual realm, which does not have a little to do with bushido.


"'The end of all etiquette is to so cultivate your mind that even when you are quietly seated, not the roughest ruffian can dare make onset on your person.' It means, in other words, that by constant exercise in correct manners, one brings all the parts and faculties of his body into perfect order and into such harmony with itself and its environment as to express the mastery of spirit over the flesh. ... If the promise is true that gracefulness means economy of force, then it follows as a logical sequence that a constant practice of graceful deportment must bring with it a reserve and storage of force. Fine manners, therefore, mean power in repose."

Did all you martial artists hear that? "...a constant practice of graceful deportment must bring with it a reserve and storage of force. Fine manners, therefore, mean power in repose." Talk about yin and yang; the warrior must contain the greatest amount of patience and repose where he builds his strengh and must also be able to explode into the fury of mortal combat. Or what about that "storage of force"? For all those with imaginations, where do you think that would physically be in your body? Your brain? Your foot? Or maybe your center, tan-tien, or hara, located a couple inches below your navel and into your body? Very interesting.

Let's return for a moment to the tea ceremony as an explanation of etiquette. 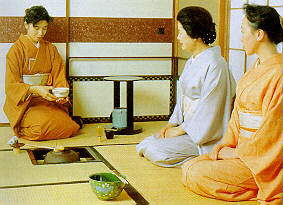 "Tea-sipping as a fine art! Why should it not be? In the children drawing pictures on the sand, or in the savage carving on a rock, was the promise of a Raphael or a Michael Angelo. How much more is the drinking of a beverage, which began with the transcendental contemplation of a Hindoo anchorite, entitled to develop into a handmaid of Religion and Morality? The calmness of mind, that serenity of temper, that composure and quietness of demeanour which are the first essentials of Cha-no-yu (tea ceremony) are without doubt the first conditions of right thinking and right feelings. The scrupulous clealiness of the little room, shut off from sight and sound of the madding crowd, is in itself conducive to direct one's thoughts from the world. ... Before entering the quiet precincts of the tea-room, the company assembling to partake of the ceremony laid aside, together with their swords, the ferocity of battle-field or the cares of government, there to find peace and friendship."

I think that this section well explains one stark difference between ideals of the Occident and those of the Far-East: in Japan one seeks to become the art, not just observe it. In Europe at this time, it would be considered of the highest culture degree to have elaborate paintings by famous artists hanging upon your walls as one plays fine music in the background while you stroll with your friends elaborating at length about the magnificent wonder contained in the things you own. This is contrasted with the silent practice of drinking tea in a seemingly bare room. However, in the tea ceremony, one becomes the art through the experience. From this deep well of strength nurtured by strict forms of etiquette, one's own creative power may emerge and dance with that of the other's in an invisible yet intoxicating realm beyond the crude senses.

Through reading this enlightening book, I hope to find the time to reveal more such thoughts from, "Bushido: The Soul of Japan."
Posted by Zacky Chan at 8:52 PM