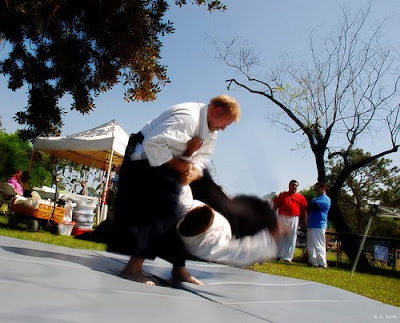 For the past week, I've been in what you could generally call a frustrated mood. Just a constant hum of discontent, and I honestly see no clear reason why. I miss my girlfriend, school is boring, I had a really good time this last weekend. Maybe it's in the moon or something. I've been doing all the right things all week and being good, but it's only slightly waned. I've started reading a few aikido books, as well as information on uchi-deshi situations, which is where students live at a dojo with other students and a teacher for maximum aikido practice time. This has made me painfully envious. Here I am in Japan, and all I can squeeze out are two practices, while people living within hundreds of miles of my old home are practicing 7 days a week with highly ranked teachers! I have an eerie feeling my time is limited in Japan, and it's time to get down to it.

For now I train two nights a week, but they will be the fullest two nights I can possibly experience. Most black belts put much attention to folding their hakama (part of the aikido uniform for black belts), so I have started doing the same with my gi and white belt. One or two other students are always there before me, so I'll show up a bit earlier. But the real way to take advantage of the time is to love your ukemi! When two people practice aikido, one is the tori (the one who throws the opponent) and the other is the uke (the one who is thrown). Ukemi is rolling, and should be done when you are the uke. I know that the uke has just as important of a job as the tori and blah blah blah ... but despite my knowledge, I have found myself blanking out or just "rolling" through the fall without paying attention. Now, I am spending much more focus on what is happening when I am the uke, and performing an effective roll. One of the senior students mentioned to me I needed to make my ukemi farther to escape better, and I noticed that I had been somewhat lazily performing them, and not keeping my eyes for a next attack. This small part has changed my aikido greatly. I am loving ukemi. All of my unwarranted frustration just enables me to look more sharply into being thrown. LOVE TO UKEMI!

My sensei and two other senior members who are there everytime love doing aikido way too much to only do it two days a week, I can just see it. So I finally, very subtley and discretely, went up to the one student who I talk with the most (and may go hiking with soon) and said, "You know, practice has been great, and I love these two days a week we come here to practice, but ummmm, I wish there was some other oppurtunity to get some more time in. I practice by myself often, but if there was some other way to practice more with people, I just think it would be more fun. ... Do you practice more?"

He quickly and honestly replied that he does in fact do aikido with the sensei and a couple other students in the next town over on Wednesday and Saturday nights. I said, "Oh, wow, cool. I'm so jealous." He mentioned that maybe it would be hard to get there by bike, as he knows that's how I usually get around. I said, "Not really." The discussion moved to hiking. I thought about pecking again more on the extra training topic, but if it's one thing I intuit, its that Japanese sensei do not like being bugged about this kind of stuff like extra training or testing, especially from gaijin... though surely they could appreciate honest enthusiasm. Perhaps they can smell fresh young meat to be thrown around, and if nothing else, they could use someone for repeated ukemi ... and since I LOVE UKEMI now, what could be better?