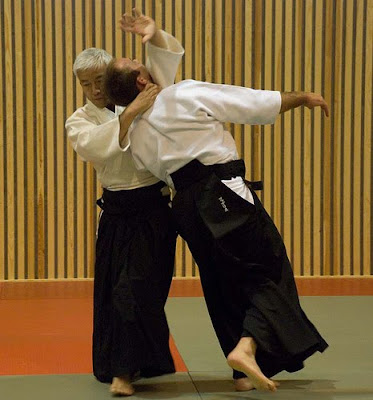 Sorry to already make a repeat in the lessons, but I'm afraid it may happen from time to time. Tonight it's about making things into one movement. Tonight we were working on iriminage, and it was during omote (to the front) where this concept really appeared as a little demon. I think it's more common to practice ura (behind), at least for beginners, but tonight we were shown a version of omote I hadn't seen before. Against a shomenuchi attack, you slide to an irimi movement putting your arms up below their strike, but then draw them back, and then one more time in their direction. There's a lot of back and forth action to make it one movement but it doesn't mean that it can't be done. From my small experience, it seems you make your movement before contact is made. In katatedori movements (wrist grabs), you first learn to execute the movement after the aite has grabbed your wrist, but if you watch the higher belts, often the will do the whole movement before their wrist can be grabbed. I think that comes into play in iriminage omote which I experienced for the first time tonight.
Not ichi, ni, san, shi, go, roku ...
But iiiiiiiiiccccccchhhhhhiiiiiiiii.
For bonus info on lesson 4, during the winter time I would rarely make one drip of sweat. However, as it is late spring, I am already sweating buckets. I can't wait until the real Japanese summer hits in July and August. I can't even imagine sweating anymore. I better remember to bring my hand towel, or my partners will never want to train with this slimy gaijin.
Posted by Zacky Chan at 10:35 PM